Drew has stayed sick for the past six months.  His ENT determined that it was time to remove his adenoids and put in ear tubes.

Even though these procedures are quite common, it's still scary for a parent to think about your child having anesthesia or experiencing post-op pain.  In short, it sucks butt.

I learned something about surgery during this process, though - Moms and Dads deal with it very differently.  Moms get clingy, cry, and eat Girl Scout cookies by the sleeve.  Dads throw out hundred dollar bills like they're P. Diddy.

And John Gray, if you're reading this, YES you may add that last paragraph to your Men Are From Mars, Women Are From Venus book.

Brian suggested that we get a hotel room near the surgical center.  That would keep us from getting caught in hours of morning traffic.  Anything that saves me from setting my alarm clock for 5 a.m. is a-okay with me.

What "P. Daddy" failed to mention was that he didn't just book a hotel room, he booked us a swanky penthouse suite.

Truth be told, I'm kind of hoping that somebody needs surgery before our next vacation.  I'm totally willing to go under the knife if it can score me an all-inclusive resort.  Do I really need my gall bladder anyway?

P. Daddy suggested that we take Drew out for an expensive Italian dinner and then back to the hotel to walk through the lush gardens and swim in the heated pool.

Is this what it's like to be a Kardashian?  If so, then they deserve to be that stupid.

Back in our sweet suite, we were bathed and in our pajamas.  Bailey asked if she could get some candy from the vending machine.  And, sure - a simple Snickers bar would be fine if she wasn't P. Daddy's daughter.  So P. Daddy said, "Why don't we go out for dessert?  Cafe Intermezzo is just down the street."

Whoo hoo!  I love that place!

But it's not very kid friendly.  As in, I've never seen anybody under the age of 18 walk in there.  Ever.

It might be because a piece of cake will set you back twenty-bucks.  Or because after a certain time of night, it becomes more of a martini bar than a restaurant.  But either way, kids just don't go.

Unless you're P. Daddy's kids.  THEN YOU CAN GO WHEREVER YOU BLEEPIN' PLEASE.

Listen, missy.   I know that when you're 19-years-old, you never foresee a time when you won't have a babysitter for everything.  But after you have children, you'll see that dream die just like the one of you wearing your size O skirt again.  Sure - you think it's fine to leave your Shih Tzu in the car, but people frown upon that for LIVING, BREATHING CHILDREN.  And unfortunately, our nanny asked for the night off - something about tutoring the Kardashian girls - so yeah, the kids are coming in with us.

The hostess sat us in the dead center of the restaurant.  Thanks for that, by the way.  It's 10 o'clock and we are about to feed our 3-year-old a piece of cake the size of Rhode Island.  But he will probably barely even annoy all your patrons.

As if they planned it ahead of time, everybody turned their heads toward us simultaneously.  So quickly that it almost made a whipping sound.  It was like a Flash Mob where the only choreography was to quickly turn and stare at the dumbasses who brought their children to a bar for some cake.

Their silent screams demanded that I leave so that they could sip their Cosmopolitian in peace.  I could hear Reese Witherspoon in Sweet Home Alabama repeating over and over, "You have a baby....  In a bar?"

Their eyes threw tiny daggers at me and I could feel them piercing my white trash skin.  I began to sink into my chair as if lowering myself three-inches could hide me from their judgement.

Bailey asked if she could order a root beer.  PERFECT.  There's nothing that could make me look any more white trashy than if my kids drink out of glass bottle right now.

But then I remembered that I am married to P. Daddy!  And when you're spending money that you don't have, your kids can do whatever they want!  It's a law, I think.

Then we mockinly took pics of the kids drinking from the root beer bottles.  We acted like we were uploading them to Facebook just like everybody else was doing at the time. 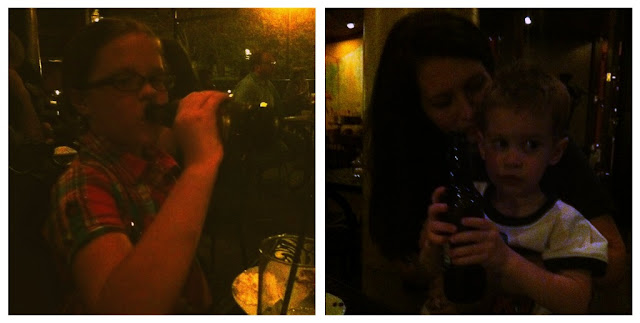 It's true, right?  About midnight on a Girls Night Out, there's nothing better than uploading pics to Facebook of you posing with your alcoholic beverage like it's an Oscar!  IT'S FREAKING HILARIOUS.

But me?  Pfft.  No, not me.  I would never do something as ridiculous as that.

After that photo collage, I realized that I am EXACTLY the kind of white trash who would take her kids into a bar for some cake.  I guess it all makes sense now.

Did you remember to vote today?  One click = One vote.
Vote for me and we'll take your kids to a bar, too.

Labels: Being A Mom