Hi, I'm Amanda. I'm a working mother of two in metro-Atlanta with a passion for writing and overpriced shoes. Blogging saves me money but doesn't look nearly as good with a cocktail dress.


I have had three loves of my life: my daughter, my husband and my son. I list them in that order because that is how they came into my world. Life has a funny way of turning out exactly how it is supposed to.

My husband, Brian, is tall, dark and handsome. He's a tech nerd with a plethora of information about everything from pop culture to nuclear physics. Please don't let my "hey, look at me!" personality prevent you from noticing that Brian is hilarious. He's definitely the one that you want to get to know.

You've heard of surprise birthday parties, right? Well, I had a surprise wedding. On a Spring Break trip, Brian proposed over room service breakfast and Nick Jr. cartoons. Bailey was so proud when she presented the ring to me. Then he told us that he had an entire ceremony planned on the beach at sunset: minister, photographer, dresses for me and Bailey, hair and makeup appointments, dinner reservations - the whole nine. The three of us stood there, barefoot in the sand, and spoke vows straight from the heart. My wedding is my favorite fairytale. Disney is thinking about picking it up.

My blue-eyed girl, Bailey, is 11-years-old. She is beautiful, smart and kind. She is an amazing softball pitcher, so between private lessons, practices, games and tournaments, we stay on the road a lot. Translation: we have hot dogs for dinner at least three nights a week.

Drew is my toddler hottie who will drive all the girls wild one day with his Daddy's good looks and his rockin' dance skills. He is such a sweet little boy who made our family complete. And he will kick your butt in a game of Mario Kart! Consider yourself warned.

We have a four-pound Pomeranian named Belle who we adopted from Bailey's former softball coach. There is no such thing as a "teacup" Pomeranian, but for some reason, Belle never grew to a normal, adult size. I can definitely relate because the same thing happened to me. Belle, single-pawedly, turned me into a dog person. Or at least into a cat person who likes dogs that act like cats.

In September, 2012, I was diagnosed with Cervical Cancer through a routine annual pap smear. I had no risk factors, no history of abnormal paps and no physical symtoms, so I represent that one percent. I had treatments, two surgeries and almost went crazy once or twice, but today, I can officially say that I'm a cancer survivor. One preventive exam saved my life. It can save your's, too. Read my cancer story here. 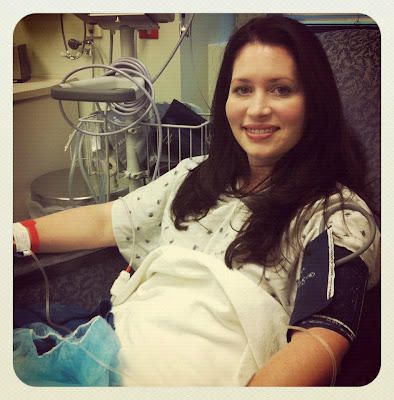 I work for a family owned and operated health insurance agency, which is especially great considering that my family is the one who owns and operates it. I love working with my parents and my two sisters. My kids have already chosen their offices for when they come to work with us one day, too. Bailey chose the one with the biggest window and Drew chose the one with the most furniture to climb on.

I have a Bachelor's Degree in Psychology with minors in Human Services and Communications.  This indicates that I had no clue what I wanted to be, but just knew that I was really good at talking.

I have always needed a creative outlet, which has morphed into several different hobbies throughout the years: drawing, painting, sculpting, cooking, gardening, decorating, and writing.

From the late 90s to mid-2000s, my songwriting landed me a handful of local and national songwriting awards, dinners with a few celebrities and my own reality television show. I still love writing songs like this one about Walmart: (Complete with People of Walmart photos) .

werdyab is my children's nicknames spelled backwards. (Bay Drew = werdyab)  This is the perfect blog title for two reasons: 1) It's metaphoric, as in, when you have children, you never know if you are coming or going and 2) If I have another baby, this guarantees that his/her name will be Moc (for the dot com).  And who wouldn't want to be named Moc?

So pour yourself a cup of coffee and take a look around. If you enjoy reading these posts even half as much as I enjoyed writing them, then we are both going to be pretty happy.