A Smurfy Night Out 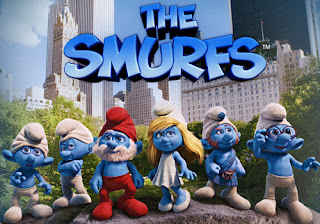 We took the kids to see The Smurf Movie over the weekend.  It felt like a 1983 Saturday morning up in there.  I wonder when the Monchichi movie is coming out?

As I  watched The Smurf Movie, one thought kept popping into my head:

EXACTLY HOW MUCH CRACK WAS THE GUY SMOKING WHO CAME UP WITH THIS STUFF?

My guess is somewhere between a lot and a crap ton.

What I Learned By Watching The Smurf Movie:


I give this movie 1.5 stars.  The storyline is flat and the jokes are redundant. Hollywood can call it "The Smurf Movie" but I'll call it "two hours of my life that I'll never get back".

And the worst part? Between tickets and concessions, we dropped over 60 bucks on this mediocre flick.  Pfft. Smurf me.
Posted by Werdyab Blog at 12:08 PM