I saw a UTO this afternoon: Unidentified Texting Opportunity.  So I seized it!  Booyah! 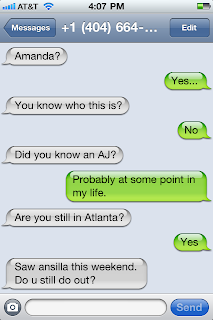 Is there a stalker translator in the house?  Because I do not even understand that last text.

So I asked my sister, "Do I know an AJ?"  (There are several years that I have almost completely blocked out.)  She confirmed that I do not, but regardless, I saw no need to respond, so I didn't.

But after a few minutes, he sent another text, and curiosity got the best of me.  Check out UTO: The Sequel. 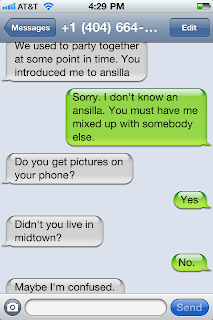 I had total UTO remorse after responding "Yes" to his "Do you get pictures on your phone?" question.

For future reference, the correct response should have been: "No, I don't. The last time that I bought a cell phone was the same day that I bought the Ace of Base cassette.  I just love I Saw The Sign."

Fortunately, he did not send any photos, but instead, he went straight to his Text a Stranger Lifeline and asked if I had ever lived in Midtown.

Well, good heavens, no.  He clearly has not heard my strong southern accent.  Midtown does not want crap like that rednecking up their streets.

Who in the devil could this be?  I'm curious, but not curious enough to pursue it any further.

Thanks for the afternoon entertainment, UTO. This was the most interesting thing that happened today.  Yes, it's that sad.