This hashtag went viral on Twitter after Kim Kardashian announced that she was filing for divorce from Kris Humphries after only 72 days of marriage.  Kardashian cited "irreconcilable differences" because "publicity stunt has run its course" is not considered politically correct.... yet.

In fact, I think that hashtag is even longer than their marriage.

So I decided to come up with my own list of #ThingsLongerThanKimsMarriage. 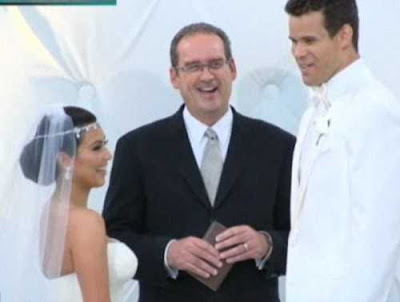 1. Milli Vanilli's Career.  In 1988, the German duo hit the charts with #1 songs like Blame It on the Rain and Girl You Know It's True (true, true... true, true).  For two years, the group depended on smoke and mirrors and their better-than-Britney-Spears lip syncing skills to scam us into believing that they were actually singing those songs.  That's, like, ten times the length of a Kardashian marriage.

2. Other ridiculously short celebrity marriages.  Goodbye are the days of laughing at couples like Kenny Chesney and Renee Zellweger, Nicolas Cage and Lisa Marie Presley, Kid Rock and Pamela Anderson, and Drew Barrymore and Tom Green.  The only celebrity union that beats Kardashian's marriage to Humphries is Britney Spears and Jason Alexander who were married for 55 hours.  You know - just long enough for the ecstasy to wear off and for Britney's Mama to show up and give that boy a talkin' to.

3. New Coke.  April 23, 1985 will go down in infamy as the day that some idiot decided to screw up all that is good in America.  This crappy excuse for Coke replaced the original formula, and almost immediately, sales deceased 80 percent.  Just three months later on June 10th, the original forumla, later named Coca-Cola Classic, was found again on the grocery store shelves.  New Coke was officially banned from the planet in 1992.

4. A Bad Hair Year.  In 1986, I had one hairstyle that combined everything that could possibly go wrong on a single head of hair: wings, mullet, a cheap perm, and a used bottle of Sun In (which by the way, does not give you "natural" highlights).  This hideous, God forsaken, destroy all photographic evidence hair disaster lasted longer than the Kardashian/ Humphries union.

5. The Tonight Show with Conan O'Brien.  O'Brien held hosting honors for just 236 days between 2009 and 2010 before Jay Leno returned as the last night host - making it three times longer than Kris Humprhries did as Mr. Kardashian.

7. Lindsay Lohan's time in rehab.  Some of Lindsay Lohan's rehab stints have been voluntary and some have been court-ordered, but since 2007, Lohan has spent a total of 247 days in rehab, a.k.a., 3 1/2 Kardashian marriages.  Clearly rehab works about as well for Lindsay as marriage does for Kim.

8. Puppy Love.  When I was a teenager, I had a boyfriend who I had dated, like, FOREVER... you know, at least six months.  We were an established couple and there was a big social event right around the corner.  It would be awkward to break up with him beforehand, and besides, what if I couldn't find another date in time?   The number of days that I suffered through 1-4-3 messages on my pager was longer than this marriage.


9. Kim Kardashian and Kris Humphries' Engagement.  They were engaged for 85 days before cashing in millions for their wedding.  How can an engagement last longer than the marriage?  Listen, I get it.  Don't underestimate the time that it takes time to build a $172,000 wedding registry.  You can't just throw it together in 71 days, you know.

What makes your #ThingsLongerThanKimsMarraige list?
Posted by Werdyab Blog at 3:20 PM