I washed a load of laundry with poop today.  Yeah, there's probably a way to sugarcoat that statement, but I couldn't think of one.

As I pulled some clothes from the dryer, I caught a distinct whiff of poo.

But it wasn't Drew.

But really, where was this stench coming from?

My nose can quickly transform into that of a bloodhound.  I'm just like that Jacob kid off Twilight, but my abs don't look as good. (For those of you who just said, "What abs?", you can come to my house and find the poop next time.)

I determined that the smell was coming from the dryer full of CLEAN CLOTHES.  Huh?  Well, that makes no sense.  So I continued to pull the clothes out of the dryer and then I saw it.  A tiny, Tide-washed, Snuggle-dried, petrified piece of poo.  Ewwww! 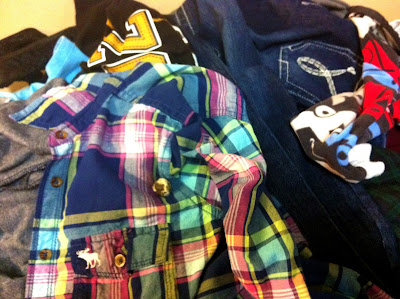 See that little, string-wrapped, brown thing on Bailey's plaid shirt?  That's poop.  HEY.  I paid fifty bucks for that Abercrombie shirt!   You mean that little moose couldn't help me sniff out that nugget?  It's like I only buy these clothes for the name brand or something.

Oh, and how awesome would it be to have scratch-n-sniff photos on blogs?!  I really want you to understand how bad it was.

Am I saying that the detergent and fabric softener couldn't drown out the smell of a few quarter-sized poop pellets?  Yes, that's exactly what I'm saying.  This is a great science experiment, kids.  I'm calling first place for Bailey at next year's school fair.

Barring Drew climbing into the washer and dropping trous, I think the poop must have come from some "accident" underwear that his preschool sent home in a grocery bag.  No, I didn't check to see if they fished out all the poop first.  I worked off good faith.

Because when I looked through the clothes, I found a pair of Thomas the Train underwear that reeked!  If you've ever wondered what hot sh*! actually smells like, I can tell you.

I really don't know why I sniffed through the entire load of laundry until I found the source of the poop.  It's like when somebody says, "AWWW.  THIS SMELLS AWFUL" and then they hand it to you and you smell it.  Why do we do that?

So I'm not saying that Drew's preschool intentionally sabotaged my laundry.  I'm just saying that a few issues lately could have caused them to sneak poop into Drew's backpack.  Ahem.

WHAT is that smell, Mama?
I accidentally washed poop with these clothes.
Well, why did you do that?
I didn't mean to.  I think Drew's preschool sent home underwear with poop still in them.
Ohhh.  Payback, huh?
Yeah, I suppose so.
So.... do I have to wear these stinky clothes or are you going to rewash them?
No, honey.  I'm going to rewash them.
Cool.  Goodnight, Mom.
Goodnight, Bailey.
Goodnight, POOP!

It's true what they say" What goes around comes around.  And sometimes, it comes back around as poop.