Why I Don't Have an Elf on the Shelf (this time, it's personal)

It's that time of year again, folks. Mothers everywhere are posting hilarious pics of their Elf on the Shelf on social media.

But not me. And not because making a doll roast marshmallows over a Yankee Candle isn't a good use of my time. It's because I actually know the co-creator of Elf on the Shelf.

A few years back, a friend mentioned that one of the Elf authors attended the same college that I did.  TALK ABOUT SMALL WORLD.

A quick Google search revealed she wasn't president of the "Amanda is Awesome" street team.  In short, she was my 18-year-old arch-nemesis.

I never considered I might actually know the woman behind the elf. Have you ever researched the inventor of Sham Wow? Or Silly Putty? You know why? BECAUSE YOU DON'T KNOW THEM.

Let me set the stage for you. It was the summer of 1993. I walked into a large student center for my first college orientation meeting and saw a handsome upperclassman. Trying to break the nervous tension, I turned to my roommate and said, "Five bucks says I'm dating him by the end of the first quarter." It was just a joke. I'd probably never even meet the guy.

But I did meet him and we talked. He even asked me out on a date. And then I found out he already had a girlfriend. (He conveniently left that part out of his swooning.)

His girlfriend happened to be a well-liked, well-known student leader on campus. She was cute and sweet and smart. God, I hated her.

So it's still pretty gray as to whether I won that five-dollar bet or not.

Anyway, as luck would have it, she was a big sister in the sorority that I was pledging and initiation week was just around the corner. Awesome. This should be fun.

Under penalty of death by sorority code, I cannot disclose exactly how crappy she made my life that week. But let's just say she wasn't baking cookies or leaving sweet notes in my dorm room.

She and I never got past our Boom I Got Your Boyfriend era. When we were in the same room, the temperature increased 20-degrees and people started gasping for air. So as a favor, I avoided her the same way Kim Kardashian avoided marriage counseling.

At the end of that year, she transferred schools and I completely forgot about her. Until the elf. That fun, creative, undeniably awesome, stupid, little elf.

Unfortunately, this childish feud from almost two decades ago prevents me from spending one red cent on that elf.

And now I feel left out!

I don't get to surf the web for elf ideas to claim as my own. I don't get to yell at my husband for his lame attempt at creativity when it's his night to move the elf.  My children can act AFOOL from Thanksgiving until Christmas and Santa will never know.

Drew asked, "Mama, why don't we have an elf?" And I said, "Because elves don't visit homes where the Mama has a bitter heart."

And since the elf wasn't an original idea anyway (ahem), I thought I could borrow her elf and make it my own.

Now introducing the Boom I Got Your Boyfriend Elf: A New NEW Christmas Tradition.

Leave this elf on the doorstep of the girl whose boyfriend you've just stolen. If you have the elf, you don't have the guy. It's that simple.

At night, your elf will come to life to cry, look at pictures of the ex, stalk his Facebook page, listen to Michael Buble songs, and eat ice cream by the gallon.


Back in the day, this would have really cleared some things up for me. I'm doing these girls a solid. 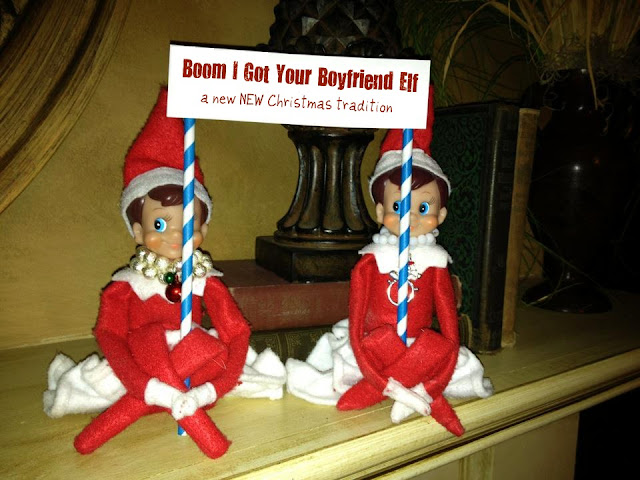