Did you know that?

Until I was diagnosed myself, I had no idea that January was the awareness month, the ribbon color was teal, or pretty much anything else about the disease because cervical cancer was something that happened to somebody else until it happened to me.

That needs to change because over 4,000 women die each year from cervical cancer. I know because I was almost one of them.

When I was first diagnosed, I wondered if it was my fault. That's the common misconception about cervical cancer that perpetuates the silence.

Most cervical cancers can be linked to HPV, a virus that 80 percent of women have been exposed to in their lifetime, so it's a little more common than you might think. I've never been a math person, but in this case, I'll make an exception. Let's crunch some numbers:

The 2009 census estimated that over 315 million people were living in the United States and 50.7 percent of them were women. So divide the population in half, calculate 80 percent, that's roughly 126 million women who have been or who will be exposed to HPV. Chances are you might be one of them.

So why are we not talking about this again?

There are a few things that you can do to decrease your risk for HPV such as, ahem, safety first (please don't make me go into any more detail, mmm'k?) and limiting your sexual partners. These measures do not eliminate your risk for HPV but will reduce it. For example, a thirty-something at my oncologist's office has had only one sexual partner (her husband) but has HPV. It can happen to anyone.

If you are under the age of 25, you can also get vaccinated against the strands of HPV most commonly associated with cervical cancer. Ironically, when my daughter got her vaccination, I had cervical cancer and didn't know it.

But remember, not having HPV does not eliminate your risk completely. I was never diagnosed with HPV, but I was diagnosed with cervical cancer. I'm the one-percent.

The best thing that you can do to protect yourself against cervical cancer is to have an annual pap smear.

That's how I was diagnosed. I had no risk factors and had never had an abnormal pap. My only physical symptom was feeling a little more tired than usual. I had no pain or bleeding. I walked into the OB-GYN's office without a care in the world.

I expected to get the "everything is fine" postcard in the mail, but instead, I got a phone call to schedule a biopsy. It's sort of the same thing except that one is no big deal and the other one makes you cry yourself to sleep.

A preventive exam is the only reason that I caught my cervical cancer early. If I had missed an annual pap or two, we'd be having a completely different conversation right now.

Today, I can officially say that I'm a cancer survivor. My second pathology report showed all clear margins, meaning, it looks like they got all the cancer out. I will continue to have tests every three months, but that initial report was pretty crucial. 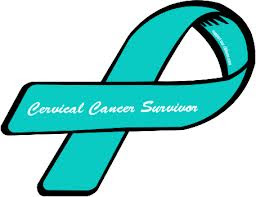 Several people have said to me, "You're such a fighter; I knew you would beat this." or "Cancer didn't stand a chance against you!".  And although I appreciate the compliment they're trying to pay, those words make me feel so guilty, too.

See, the human spirit is designed to fight, and we all have that fight down deep inside us, but I had early detection on my side, and not everybody gets that chance. If I was diagnosed with Stage 4 cancer instead, my desire to live would not have been any less, but my statistical chances of beating it definitely would have been.

Women, the good news about cervical cancer is that you can catch it early and that's what makes this disease so curable. One preventive exam saved my life and it can save your's, too.

Have you had an exam in the past year? What?! No? Girl, don't make me call your Mama on you!

If you haven't had a preventive exam lately, pick up the phone and make that appointment right now.  Pretty please? It might just save your life.