The Weekly Un-Wrap Up: Part Deux

On Wednesday, Brian went out of town for work.  The kids and I had dinner at Ruby Tuesday's.

About halfway through dinner, Bailey said she was full.  On the way home, she felt car sick.  And when we got home, she went straight to bed.  Bailey going to bed at 8 o'clock is about as rare as Halley's Comet - you only see it once every 75 years.

Folks, in literature, they call that foreshadowing.

Because, parents, you know what's about to happen, right?  P-U-K-E.  All the signs were there: feeling full, car sick, voluntarily going to bed.  The fact I didn't see it proves that I'm slipping as a parent.  Next thing you know, I won't even tell her that sitting too close to the TV will ruin her eyes.  Always wear clean underwear in case you're in an accident?  Forget it.

When I walked upstairs, Bailey was using the restroom in the master bath.  I heard her cough once or twice from behind the closed door.  I knew what that cough meant: P-U-K-E.

I asked her if she felt nauseous and she said yes, so I offered her a trash can, but she wouldn't open the door.  And I totally understand, y'all.  Privacy first!  But those were desperate times.  Vomit supersedes modesty.  It's a law, I think.

I heard the violent splatter of chicken fingers and french fries hitting all four walls in that tiny, little toilet room.  I looked down and saw a puddle of  liquidly grossness flowing from beneath the closed door.  It looked like an SVU crime scene in there.  If I'd been holding yellow police tape, I would've roped off the area for everyone's safety.

And look, scientifically speaking, I can't explain how a 75-pound girl produced 58-pounds of puke, but believe me, it happened.  There was vomit everywhere, including an open linen closet, so every towel was soiled, which was awesome because you never need a crap-ton of towels when a stomach bug hits your house.  Ahem.

Bailey ate two of Drew's noodles at dinner.  How did I know?  Because I saw them.  I felt like a crime scene investigator, solving the mystery by dissecting the contents of the victim's stomach.  Ah-ha! She stole two of her brother's noodles at Ruby Tuesday's. Case closed.

That poor baby, I've never seen her so sick.  She threw up ALL.NIGHT.LONG.  The only thing that I could do was rub her back and tell her that I was sorry.

She finally fell asleep, and then two very short hours later, I got up for work.  My body can't hang on two hours of sleep anymore.  I felt like I had a hangover bigger than all my college keg parties combined.

And speaking of keggers, the morning after your child's stomach virus looks exactly like the morning after a wild night of partying:  You're exhausted, you're head's pounding, the bathroom's trashed, clothes are all over the floor, your stomach can only tolerate Gatorade and bread, and there's someone sleeping in your bed, but you don't want to get too close because you're scared you might catch something.

The only difference is that now "hair of the dog" is actual hair of the dog.  Somebody please remind me to get my Pomeranian to the groomer's, m'kay?

And then there's that awkward moment after someone's been sick when you start looking at the rest of the family and wondering which one of us is next.

I thought Drew was a likely candidate.  If it may please the court, I would like to present Exhibit A.  These photos were taken less than 30 minutes before Bailey was tossing on my bathroom floor.  Ladies and gentlemen of the jury, were any germs exchanged here? 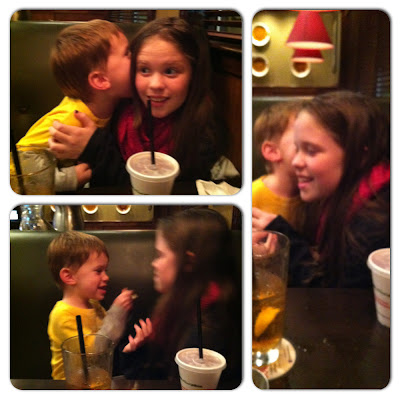 At the time, I thought it was adorable that Drew wanted to "tell sissy a secret", but then later, I thought it was significantly less adorable when I was worried about him getting sick.  There's only so many towels that a mom can wash in a 24 hour period.  Are you feelin' me?

But guess what?  He never did, and neither did Brian or I.  Poor Bailey, that made me feel even more sorry for her, like she had to suffer all by herself.  I don't know what she did to piss off the puke gods, but I can assure you, at this point, she's been cleansed.

And I know I lured you here with the promises of a juicy make out story, but all this puke talk has spoiled the mood.  We'll save it for next time.

Hey, do you know what that means?  Weekly Un-Wrap Up: Part Tre, adding Italian to my foreign language repertoire. BOOM. There goes the dynamite.