This blog is going to begin with two very disappointing pieces of information:

My husband doesn't understand why I want to pay $24.99 for a couple of finger sandwiches and some scones.  Pfft. Men. It's all about the atmosphere and finding my inner-Brit. I mean, if I act like that in the grocery store, people are going to talk.  Besides, I'm not very good with the accent yet.

I don't have any pics from today, but here is a pic of me and my friends from my birthday lunch. Looks like fun, huh? 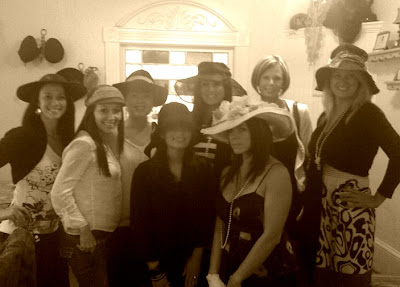 And I figured... 'Is there anything better to do on a Saturday night than tea research?'  That's meant to be a rhetorical.

Tea was accidentally discovered by Emperor Shen Nung in 2737 BC when tree leaves fell into his cup of sterile, boiling water.  After drinking the liquid, he felt refreshed, so he got the word out to his Chinese peeps.  Two thousand years later, Buddhist priests brought tea to Japan and it (Buddhists and tea) quickly become part of the Japanese culture.  The Portuguese and Dutch created trade routes with China in the 1600s and brought tea to Europe through creation of the Dutch East India Company.  Soon all the cool kids in Germany, Holland, France, Russia and England were paying homage to "Chai"-Town.

All true tea (white, black, green and oolong) comes from the same plant: Camellia Sinesis. Herbal tea isn't tea at all but rather a tea-like drink made from flowers.  Studies show that tea can provide over 15% of the minimum daily requirement of calcium, 10% of folic acid and 45% of manganese.

There is only one working tea plantation in America, which is located near Charleston, South Carolina.  The plantation boasts 127 acres of tea bushes in its state-of-the-art facility.  Most Americans prefer black tea (which we call "iced tea", and in the south, after we add five cups of sugar to it, we call it "sweet tea").  We drink over 50 billion cups of tea each year.

I'm always looking for homeopathic remedies.  Below are a few tea recipes you might find useful as well.

The Skinny Minnie
Add 4 rounded teaspoons of Oolong tea to 3 cups of boiling water to stimulate weight loss.  You can drink this up to three times a day.

Chillax Me Tea
Mash 3 cm of banana into the bottom of a cup and then add 1 1/2 teasppons of Dragon Well Green Tea and 1 1/2 cups of boiling water to treat high blood pressure.

I Can't Believe It's Not Butter Tea
Put 1 stick of Imperial Keuding in an empty teapot and add 1 1/2 cups of boiling water to lower your cholesterol.

No Flu Fo You, Daniel-son
Grind 1 teaspoon of uncooked long grain wild rice, 3 slices of ginger, and 2 teaspoons of Dragon Well Green Tea into a paste (add a little cold water to grind).  Add mixture to 3 cups of boiling water to cure the flu.