Have a Blog & a Smile

Come to find out, none of these "fairs" serve candy apples or deep-fried butter.  Talk about false advertising.

Teachers, let me fill you in on a little secret.  A seven year old is not doing online research, printing photographs or creating charts and graphs.  They didn't make those glitter letters, either.  It's the parents doing the manual labor on this one.

Except for the projects that are really terrible.

One year for Secret Santa, I'm going to do Science Fair projects for kids with parents who expect them to learn stuff on their own. Pfft.  Like anybody does that these days.

But Bailey isn't seven years old anymore.  She's ten now and practically an old lady.  She is perfectly capable of doing her own research project.

She chose The Coca-Cola Company for her topic.  She came up with her own ideas, collected her own data, gathered her own props, and wrote her entire report.  I did not correct one comma splice.

And guess what?  She rocked it out.  Maybe tomorrow, I'll even let her cut her own meat.

However, at some point last night, I realized that Bailey's artistic work was moving at a snail's pace. I hoped that her display would be ready in time to send her off to college.

So I stepped in to help.  Because I like to help.  (And I have control issues.)  Plus, it's only fair considering that she was predisposed to procrastination on her mother's side. 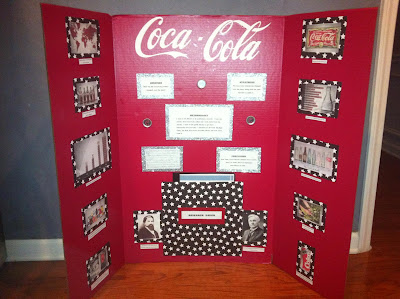 While helping, I read her report. (It was quite impressive, by the way.) And then, being the nerd that I am, I decided to do more research (for fun) at two o'clock this morning.  Some days it's hard being this cool.


Here are a couple of interesting things that I learned about Coke:

Dang!  This blog is turning into a PBS broadcast.  Somebody quick - tell a story about falling down a flight of stairs or burping or something.  Anything.