Mr. Stinky Pants hit on me

The last few months of 2011 can suck it!  We've either been stuck in the bed sick or stuck in some doctor's office watching 1995 Disney movies.  For fun, we would play Look At My Puke & Guess What I Ate.  Hey. Don't judge.  It's been a rough patch.

But Drew woke up this morning without a fever!  Hallelujah!

He was begging me to take him somewhere.  ANYWHERE.  He's been stuck in the house for days and so have I.


I wonder what the weather is like out there...  Wow.  What is that fiery ball in the sky? Is that the sun?  It's been so long since I've seen it, I almost forgot what it looked like.


So I decided to take Drew to McDonald's and let him play on the indoor playground because 1) it's free and 2).... yeah, mainly because it's free.

As I was scrolling through my Facebook  news feed, a random Dad starting talking to me.  No matter how many times I tried to politely close the conversation, he kept talking.  CAN'T YOU SEE THAT I'M BUSY HERE?  I MIGHT MISS A TRAFFIC RANT OR AN INSPIRATIONAL QUOTE IF YOU KEEP YAPPING.

It's been a long time, but I think he was hitting on me.  Yes, I know that sounds narcissistic, but without saying it, the punchline won't be as funny later.  And I'm willing to look ridiculous for a laugh.  IT'S WHAT I DO.

He said things like "you are so nice to talk to" and "gosh, you are so pretty"...


Is this guy slow?

I didn't say two words to him.  I had on no makeup and I think I washed my hair two days ago.  *Think* being the key word in that sentence.  Poor fella.  He must really be desperate.

I found a way to mention my husband at least three times, but this guy wasn't deterred.  HOMEWRECKER!


How am I going to get rid of him?  Drew, it's time to move to the Chick-Fil-A.  They have a free playground, too, you know.


About that time, his seven-year-old daughter walked up and said,


You know when you're kind of hoping that something bad happens to somebody, but then when it actually happens, you feel awful?  That's what happened to me.


Then he left faster than you can spell narcissistic.  And even faster than that if you're a poor speller. 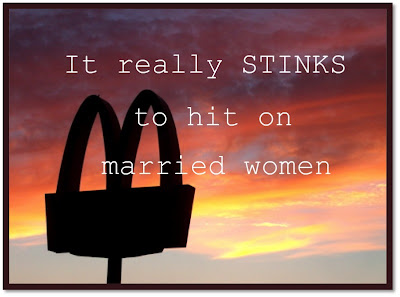