Today is our rewedding anniversary.  But don't worry - it's not nearly as Days of Our Lives as it sounds... if you ignore the fact that I had my memory erased when I was presumed dead and Brian was held captive on a private island in the Pacific while the writers worked on a new storyline for us.

Brian and I had a beach wedding, and then eight months later, we had a "rewedding" for family and friends. (Translation: much to our surprise, some people were actually upset that they missed our wedding.  No problem!  We'll just recreate it.)

While on a Spring Break trip, Brian proposed over room service breakfast and Nick Jr. cartoons.  Bailey, who was six-years-old at the time, was so proud when she presented the ring to me.  We were all so excited!

Then Brian said that he had an entire ceremony planned on the beach at sunset: minister, photographer, dresses for me and Bailey, hair and makeup appointments at the Hilton spa, dinner reservations - the whole nine....if I wanted to.

If I wanted to?  That's like Cinderella saying, "Wow. That dress is pretty and it's cool how you turned a pumpkin into a carriage and all, but I'd rather stay in tonight and scrub floors.  But, uh, thanks anyway."

OF COURSE I WANTED TO.  Name somebody else who had a surprise wedding.  Besides, I didn't have to plan a thing!  I had absolutely no stress when I got married.  Flowers?  They'll be there.  Music?  Whatever they play.  Dress?  Pressed and ready to go, ma'am.  Sounds perfect to me.

When you have a nontraditional wedding, you can focus on the romance of it all.  And when I say "nontraditional", I mean a wedding where the bride doesn't go bananas when the peonies in her bouquet are amaranth pink instead of carnation pink.

The three of us stood there, barefoot in the sand, and spoke vows straight from the heart.  Bailey said that there were some people who stopped and watched us, but I never saw them.  It felt like the rest of the world completely disappeared.  And just for a moment, the entire ocean belonged to us.

My wedding is my favorite fairytale!  Disney is thinking about picking it up.

But here's the thing about having two anniversaries: it's hard work!  Brian and I usually forget our December one. 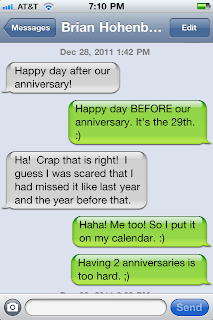 I love you, Brian.  I would marry you a thousand times!... as long as we don't have to remember all those anniversaries.