After Thanksgiving dinner, we had a stomach virus.  After Christmas dinner, we took Drew to the Urgent Care.

I'm starting to develop holiday paranoia.  I'm considering letting my kids be naughty so that Santa will skip our house this year.  With our holiday luck, he will probably fall through the roof or bring us Malaria or something.

The only thing worse than having a sick child at the Urgent Care is having a well one there.  It's Germapalooza!  I think I even saw an overpriced t-shirt stand in the back corner. 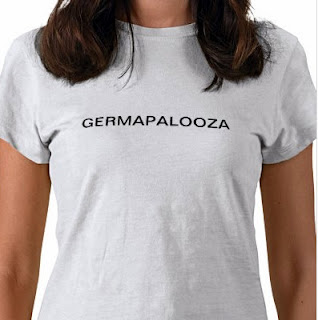 Brian offered to take Bailey on a date.  And although shopping and getting Starbucks sounded a helluva lot better than sitting across from some kid puking into a trash can, I wanted to be the one to stay with Drew.

Brian took Bailey to her favorite dining establishment - The Varsity.  Nothing gets this girl more excited than some deep-fried onion rings and a frosted orange!  And she thinks it's funny to order a "naked dog".  What'll ya have?  What'll ya have?

When you go through their drive-thru, they always give you a mound of chopped onions wrapped in wax paper.  Thanks for that, by the way.  Nah.  Don't make us ask for them.  Everybody probably wants an entire onion to put on their hot dog.

Bailey could have thrown the onions away OR she could have eaten them, but instead, she strategically placed them in the back cupholder of my SUV.

I'm calling sabotage!  Hey, Bailey -  if our DVR suddenly stops recording iCarley, I probably had nothing to do with it.  Ahem.

We didn't drive my car on Sunday, so the onions fermented.  Yum.

On Monday, about lunch time, I met an old college friend (ironically, at The Varsity) to sell her Drew's train table.

And when I say "old", I don't mean that we are old.  Of course not.  Because we're still young!  I just mean that I haven't seen her in about fifteen years.  You know, like when we were born.


Anyway, I opened my car door and was like, UGH! WHAT DIED IN HERE?  I searched until I found the bag of old onions.

My car smelled like 47 teenage boys had been in there after they played a ten hour basketball game.  And just for the record, old onions bring even more tears to your eyes than the freshly chopped ones do.

I threw away the onions and tried to clean the cupholder.  And then I sprayed, like, an entire can of Lysol and Fabreeze back there.  BUT IT STILL SMELLED LIKE A SEVEN-PASSENGER ARMPIT.

So when I saw Nancy, I think I said something like,


There's nothing like catching up with a young friend.
Posted by Werdyab Blog at 1:22 PM