My 3-year-old son speaks fluent Toddlish.  Now, before you are too impressed by my child's genius, please note that you also spoke Toddlish at some point in your life.

Toddlish is the form of English that toddlers speak.

I checked the Urban Dictionary and Toddlish is not in there!  This is a travesty, people.  But don't worry- I just notified them that a very important word was missing from the ranks of other lingual treasures such as fartriloquism and beard goggles.  Check out the Urban Dictionary's definition of blogging.  They're obviously right on the money. 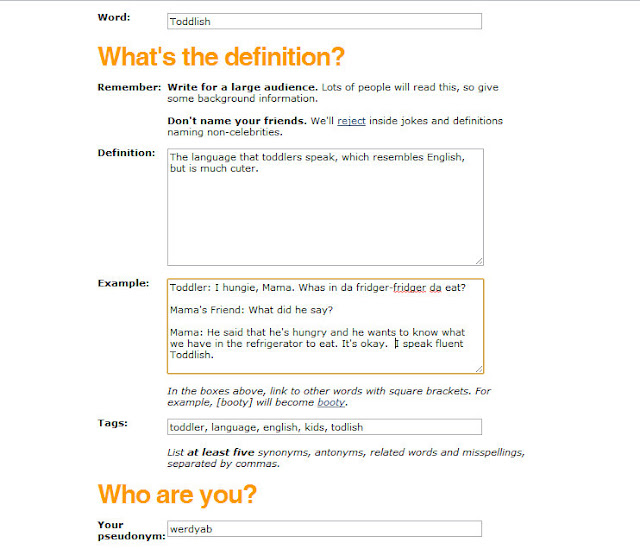 But sometimes Drew speaking Toddlish is inconvenient.  I haven't spoken Toddlish in over 33 years, so I'm a little rusty.  If Drew owned his own restaurant, I probably couldn't even order Mongolian Beef in his native tongue right now.

Recently, our language barrier has created a few misunderstandings.

"That's a re-tard."
"Drew, never call somebody a re-tard!"
(He was referring to the Sweet Tarts on the kitchen counter.)

"I want a Christmas tree."
"Awww - that's so sweet!  Of course you can have your own Christmas tree!"
(A hundred bucks and a decorated tree later, I discovered that he was actually asking for a Rice Krispie Treat.)

Sometimes Drew not having a firm grasp on the English language comes in handy, though.

At first, I corrected him, but then I was all like WHAT AM I DOING?  This is not the issue that I want to hang my hat on.  Sure - I'll correct him on the fact that Santa will come back and get those trains if he doesn't behave or that he will never grow over 3-feet tall if he doesn't eat his broccoli .... but this?  I think I'll let this one slide.

While in the grocery store checkout line last night, Drew said, "Excuse me, Mama.  I burped."  And since I didn't hear anything but I did smell something, I ASSumed he was referring to the business-end-kind-of-burp.   So I said, "Okay, baby, thank you" and continued to stack my groceries on the conveyor belt.

But apparently, Drew was looking for a little more affirmation than just a simple "thank you".  Maybe a shiny trophy.  Perhaps his own unicorn.

"Excuse me, Mama!  I burped!"  "EXCUSE ME, MAMA!!  I BURPED!!  I BURPED, MAMA!!!"  Too bad they don't sell Toddlish muzzles beside the Trident and the US Weekly magazines. 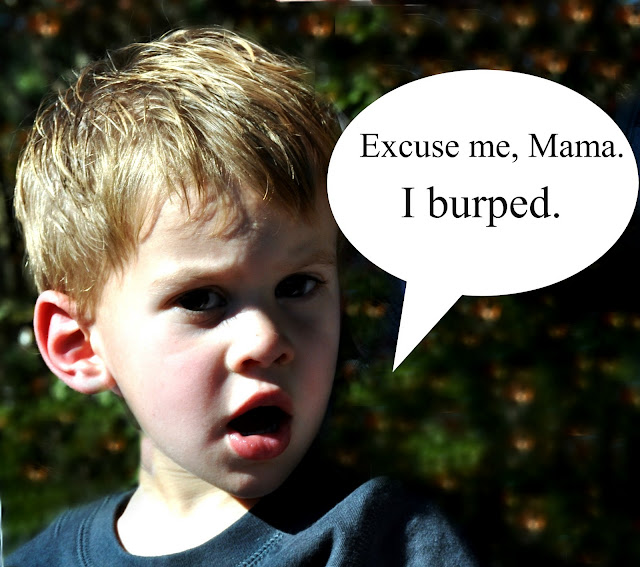 A sweet, little, old lady was standing in line behind us.  She looked like her name was probably Francis - maybe Betty - and she had just gotten a new permanent and color rinse at the beauty salon.


She said, "My! What a polite young man you have there!  You are doing a good job raising him."
Beaming with pride, I said, "Thank you.  I appreciate that."

About that time, Drew dropped his Matchbox car on the floor and said, "WHAT THE CRAP?!"  Francis or Betty looked very disappointed in me.


P.S. Toddlish made the Urban Dictionary!


Did you remember to vote today?  One click = One vote.
Vote for me and I'll mail Francis or Betty a handwritten apology letter.