Hearts were pumping, arm muscles were exposed, strategic plays were made and people were chanting the name of their idol.  No, I'm not talking about the game. I'm talking about the stuff that really matters - Madonna's halftime performance!  Below are 10 things that I learned in 12 minutes.

1. Even a seasoned performer like Madonna can almost fall on stage - but I guess once you've logged in over 10 million hours of Yoga - your toned, lengthened muscles are trained to Adho Mukha Svanasana your butt back up on that stage!  She should send them an edible bouquet or at least a thank you card. 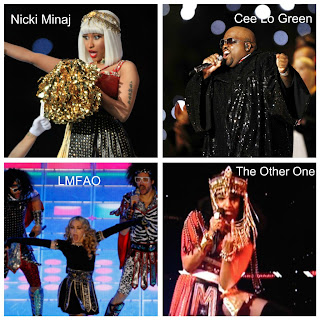 2. Nicki Minaj, Cee Lo Green, LMFAO... and, uh, who's the other one?  A quick google search revealed that it was M.I.A.  Now that makes perfect sense!  The artist who was supposed to be there was missing, so this one had to step in and take her place!  Wait.  You mean that's actually her name?  Great. Now I feel as uncool as my daughter thinks I am.

3. And while we're on the subject of the artist known as an acronym, Wikipedia says that "M.I.A. is a philanthropist and humanitarian outside of her musical career".  Huh?  Because I never saw Mother Teresa give 110 million people the finger. I guess M.I.A. is helping us in a different way.

4.  When I saw the female pop trio (Madonna, Nicki Minaj and the other one), I immediately expected a modern-day reenactment of the faux lesbianism between Madonna, Britney and Christina on the VMA stage 10 years ago. (Yes,  it was 10 years ago.  Congrats on getting old!)  That's when everybody figured out that Madonna liked Britney better because she didn't give Christina any tongue.  But Madonna proved that this kind of controversial, childish attempt at attention is just a passe, low-hanging fruit for today's pop star.  She saves all that for Katy Perry. 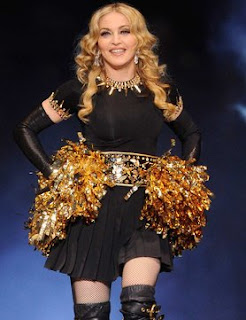 5. If I stopped stop writing this post right here at #5, drove to the Quick Trip, bought a Powerball ticket, won millions, and then used all my winnings to employ a team of the best cosmetic surgeons in the world - I STILL WOULDN'T LOOK AT GOOD AS MADONNA.  She's got 17 years on me, but she would own me in an arm wrestling match.

6. The costumes were interesting and unexpected, but I just can't buy Madonna as a cheerleader.  I was a cheerleader once - and if I had worn a cone bra or made a sex tape -  I'm pretty sure that I would have been benched from the halftime performance during the big game.

7. In many recent royal appearances - you may call them interviews - the material girl called her routine the "greatest show on earth", which was very misleading.  I expected to see people shot from cannons, amazing acrobatics or at least an elephant or two.  Instead, all I got was one guy who gave himself a vasectomy with a tight rope. 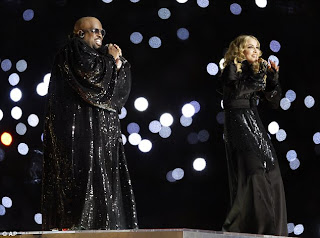 8. You can always count on LMFAO for some crazy performances!  Usually they make me LMFAO.  Ironic, huh?  But if they did something completely bizarre last night, I missed it.  I guess I was blinded by the 300 ripped gladiators that Madonna enslaved on stage.  What?  There's singing?  Dancing, you say?  Sorry.  Didn't notice.

9. Madge kept her promise for "no wardrobe malfunctions", but isn't there something between exposing your right boob and wearing long, black, drab robes?  I mean- Cee Lo Green looked like the entire night sky up there.

10. Madonna showcased her new single Gimme All Your Luvin where she rhymed "Madonna" with "you wanna" like ten-thousand times.  At least the retro vibe will give Lady Gaga some new inspiration for her next album, which is scheduled to be titled "Reductive".