Let's cut to the chase: That title is a lie.  I can't recap the Oscars.

I saw two movies this year: The Smurfs and Cars 2.  And somehow, they were both omitted from the nomination list.  So me watching the Oscars is kind of like Paris Hilton talking shop with a couple of biochemical engineers - one of us isn't gonna have a freakin' clue what's going on.

So instead, Brian watched the All Star Basketball game and I watched the back of my eyelids.  I dreamed all night long that I was tweeting with Angelina Jolie's leg.  #doestheleftonefeelleftout 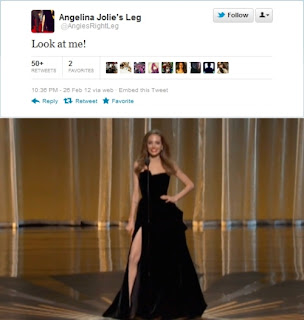 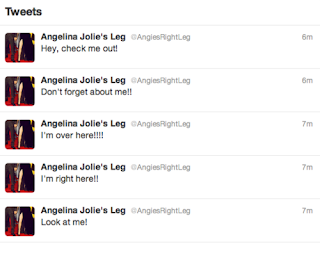 So, here's what I can tell you about the Oscars:  Susan Lucci Meryl Streep picked up the statue for Best Actress.  J. Lo had a nip slip while presenting an award.  (You're welcome, gentlemen.)  And a silent film called The Artist picked up a cart-full of Oscars.  I learned all this by listening to the radio on the way to work this morning.

Do they give out awards for the best Oscar recap?  If so, then I'm sure to be presented with a big pile of poo for this post. 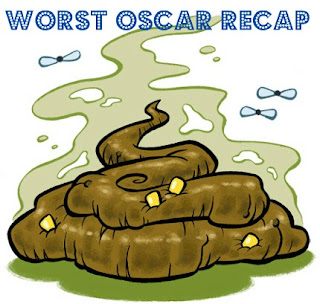 Back to The Artist (am I the only one who wants to end that title with Formally Known As Prince?) -  I wonder how long I could work on the set of a silent film...  I have to talk in my sleep because I can't go eight hours without chiming in on something.  We'd be ten minutes into filming and I'd blurt out, "OH MY GAH!  Y'all are NEVER gonna believe what happened to me yesterday!"  Then I'd be as unemployed as Billy Crystal between award shows.

So, unfortunately, I don't give a rip about the movies, but I do care about the Oscar Swag Bags valued at over $62,000 each.  It's, like, the best party favor ever!  For Drew's birthday party, I filled race car bags with a Hot Wheel, some tattoos, a few stickers, a pencil and some candy and I thought it was kind of a big deal.

Coincidentally, I opened up a bag yesterday, too - but my bag contained two wet towels from when Brian took the kids to an indoor swimming pool last week.  So instead of a $15,000 African safari, I had something that smelled like a safari that died six weeks ago and had been basking in the African sun ever since.  Close but not the same.

And, really - why does Brad Pitt or Martin Scorsese need a $62,000 favor bag anyway?  Do ME a favor and send that bag my way, okay?  Do you know how often I take my kids to Chuck E. Cheese and Monkey Joe's?  I need that $135 bottle of blinged-out hand sanitizer like nobody's business!

Besides, I think I earned a Swag Bag yesterday.  Bailey made me a flower vase out of a salad dressing bottle, duct tape and 42 pounds of purple glitter. AND SHE THOUGHT I LOVED IT.  It was an Oscar performance that would make Octavia Spencer cry.  What?  She cries all the time?  Oh.

So, Oscars, when you're ready to give me my Imanta 2,500 square-foot ocean villa vacation, you know where to find me.  At Chuck E. Cheese or Monkey Joe's, of course.  And if you want to ask George Clooney to deliver it, well, I guess I won't argue with you.


Did you remember to vote today?  One click = One vote.
Vote for me and I'll dress up like one of those Pan Am stewardesses handing out popcorn at the Oscars last night.  Pfft.  As if anybody there actually eats carbs.