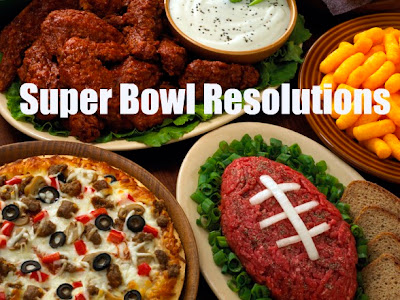 Brian knows that during the month of January, there will be football.  Lots of football.  And with football comes chips and dips and booze.  And none of those things are very diet friendly.

And who has time for exercise when you're busy watching professional athletes exercise?  There's the pre-game, game and then the post-game.  Then there's highlights, Sports Center and PTI.  I've considered putting a bedpan on the end-table so that he doesn't have to burden himself with getting up to pee.

So after attending a Super Bowl party and consuming enough Weight Watchers points to make Jennifer Hudson AND Charles Barkley cry themselves to sleep, Brian started his Super Bowl Resolutions.

Resolution One: Do not use the elevator at work.


Now if I made that resolution, I'd burn exactly zero calories per day.  I park my car and walk about six paces into our office building.  Another six paces and I plop myself into my chair.  Then I do really strenuous work like type on a keyboard or write numbers on paper.  Sometimes I even pick up a stapler.  Whew!  It's quite a workout.

But Brian works in one of those big high-rise office buildings.  In addition to the many businesses there, it has a shopping mall, a gym and a restaurant.  You can get fat and thin without having to leave the building!  And then, you can go shopping to buy new clothes that fit!  Now that's service.

So when Brian decides to NOT take the elevator at work, it's a big deal.  He has to walk up 17 flights of stairs to get to his office floor.

Yesterday was the big day!  He was ready to take his Super Bowl Resolution and make it cry like a little girl.

About halfway up, he was having second thoughts.  Dang! This is hard!  But at that point, it was just as many steps to go back down as it was up, so he continued on.

This was his freakin' Kilimanjaro!  He couldn't wait to get to the top, fling open the door, and stand there poetically as a cameraman filmed his triumph in panoramic view while hanging out of a helicopter.  It was going to be just like Rocky IV.

Those last few flights of stairs were tough, though.  I think at one point he was literally sweating buffalo chicken dip. 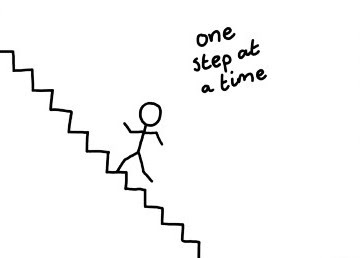 At last, HE MADE IT!  He was at the top!  And people would probably barely notice the pit stains on his shirt.

He reached for the handle.  He was ready to throw open the door and walk into his office beaming with pride, accomplishment and last night's loaded nachos.

But the door wouldn't open.  WHAT THE?

As it turns out, there is a special door code that only allows the door to open from the inside.  You cannot get into the office from the stairway.

Do you know why?  BECAUSE NOBODY IS CRAZY ENOUGH TO WALK UP 17 FLIGHTS OF STAIRS.  So Brian had to walk back down and then he took the elevator up to the 17th floor.

But here's the good news:  he met his resolution for two days AND he could have stopped by the restaurant for chicken wings and beer if he wanted to.  I'm a frosty mug half-full kind of girl.

Labels: I Hate Diets and Exercise