CAMO is a four-letter word

After winning three games in the tournament on Saturday, some of Bailey's softball team decided to go Buffalo's for a celebration dinner.

And there was only one place that Buffalo's was willing to put 20 obnoxious, dirt-covered people who had been at the ballpark for the past 8 hours... and that was FAR, FAR AWAY from their other customers.  Aside from the 10 minute hail storm and the unexpected freeze-your-butt-off temperature change, the private patio was nice.

As I was dipping hot wing #7 into a big vat of Blue Cheese dressing, I saw them.  A young couple walking through the parking lot - probably 17 years old or so - and they dressed up for prom.

And then I thought, 'Well, bless your heart.  Doesn't it suck that your fancy prom dinner turned out to be an all-you-can-eat basket of hot wings and curly fries?'

But upon careful review, I noticed that her dress was camouflage.  No, that was not a typo.  The material that hunters wear to shoot deer is the same material that this young lady chose for her prom dress.

Is this a Jeff Foxworthy joke waiting to happen or what?

I wanted to say, "Listen, honey - let me fill you in on a little secret.  Your date had no choice about the restaurant.  You show up in Mossy Oak to Ruth's Chris, and they won't even let you through the front door!" 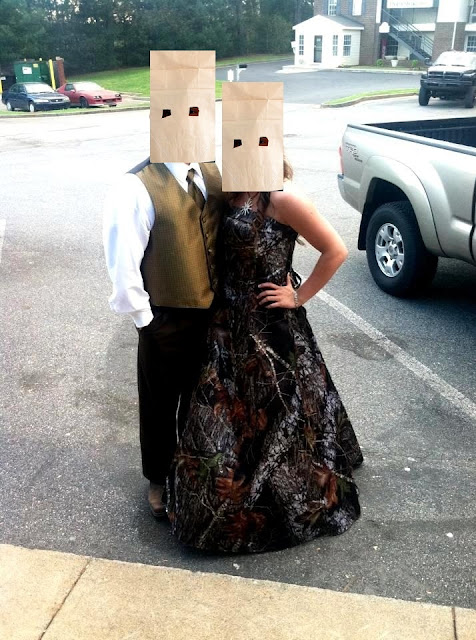 I added those paper bags to cover their heads, by the way.  One - because I'm doing these kids a solid.  Two - because they deserve privacy.  Not everybody is proud of how they are portrayed on my blog.

I guess this goes without saying, but if Katy Perry ever runs across this thing, I'm screwed.

So, on a scale of 1 to O.M.G.  What the *BLEEP* was I thinking?! - how do you think this dress will rank 20 years from now?  And here I am embarrassed about some fuchsia sequins and shoulder pads.

Someone from our table shouted, "I LOVE YOUR DRESS!  WHERE DID YOU GET IT?"  Oh, and by the way, that is the politically correct version of, "Good Lord, girl!  You're wearing camo to prom?!  Where did you find that thing?"

The young redneck shouted back, "I had it custom made!"

Right after the Cupid Shuffle, I'm hoping to score an 8-pointer.
I was standing there, but nobody could see me.
I hope Bambi is at prom.
I got this dress at the new Army Surplus Rack store at Lenox.
What's my perfume?  Oh, it's called Deer Urine.
Those safety orange pumps will be perfect with my dress!
No, we don't need a limo, but do you rent Monster Trucks?
I'm so glad that Larry the Cable Guy finally released his fashion line!

Michele ran over to the edge of the patio with her iPhone and asked if she could take their picture.  When she sat back down, I leaned over to her and whispered in my cool, secret agent blogger voice, "Hey.  Text me that pic, okay?"

McKenzie was like, "Why?  Are you going to blog about it?"  Then I was like, "Girl. You aren't given a gem like this just to throw it back in the river.  OF COURSE I'M BLOGGING ABOUT IT.  The world deserves to know."


Did you remember to vote today?  One click = One vote.

Vote for me and I'll wear a camo dress the next time that I go to Buffalo's.