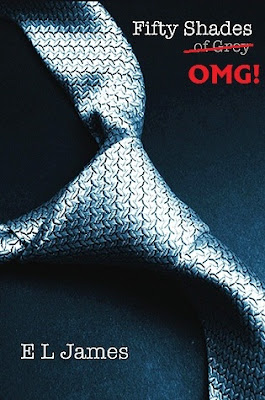 E.L. James, the pseudonymous British television executive turned crappy author, gives us the gift of Fifty Shades of Grey. Uhmmm.. thanks? But hey, is there a return policy?

This mediocre novel started out as an online Twilight fan fiction called Master of the Universe. Apparently, James was bored with all that glitter skin and unrequited six-pack abs kind of love, so she decided to skip the love part all together.

Here's the plot: Anastasia Steele is a 21-year-old virgin and soon-to-be Washington State University graduate. She falls for a rich, handsome entrepreneur named Christian Grey after interviewing him for her school newspaper as a favor to her roommate. Christian Grey is a self-professed sexual dominant who cannot show any real affection. He asks young girls to sign subordinate contracts in which Grey controls their appearance, hygiene, nutrition, exercise and sleep schedule. He wants them "ready" anytime he requests their "company" in his "playroom", and if they break a rule, they are punished in the whips and chains kind of way.

Christian Grey is controlling, manipulative and abusive. In short, he makes Charles Manson look like the Dalai Lama.

Steele is a young idiot who will do anything to please Grey, but she can't get past all the S&M, hot, nasty, monkey sex, which is detailed explicitly in the novel. She also has concerns about signing his beck and call girl contract. Steele eventually decides that she can't handle a relationship based solely on erotica.

If I wrote a novel this bad, I would use a pseudonym, too.

Check out the first paragraph of the book:


I scowl in frustration at myself in the mirror. Damn my hair—it just won’t behave, and damn Katherine Kavanaugh for being ill and subjecting me to this ordeal.  I should be studying for my final exams, which are next week, yet here I am trying to brush my wet hair into submission.  I must not sleep with it wet. I must not sleep with it wet.  Reciting this mantra several times, I attempt, once more, to bring it under control with the brush. I roll my eyes with exasperation and gaze at the pale, brown-haired girl with blue eyes too big for her face staring back at me, and give up.  My only option is to restrain my wayward hair in a ponytail and hope I look semi-presentable.


If there was an award for the longest run-on sentence and the worst use of the word "mantra", I would proudly present it to E.L. James now.

And I'm sorry to report this is as good as the writing gets, folks. Seriously, I was more intellectually stimulated by reading Hokey Pokey Elmo.

And unfortunately, everything that E.L. James knows about Seattle -  or America in general - is what she read in the Twilight series. The geography references in this book sound like something written after a weekend-long game of beer pong.

Did that annoy you? Then don't read this book.

I never thought that a best selling novel would have "oh crap" and "quirk up" appearing 842 times per chapter, but I guess I was wrong. Every sexual encounter begins with Grey "cocking his head to one side" and ends with Steele's "inner goddess doing cartwheels".

Pete and Repeat were sitting on a fence... that was obviously painted fifty shades of grey.

If your favorite show was Red Shoe Diaries or if you can't believe that Jenna Jameson never took home the Oscar for Best Actress, this book is for you.

Supporters call this book a "love story". Well, sure - as long as you think that love is whipping someone until her guts fall out on the floor. I guess I missed that scene in The Notebook.

Other supporters say that they're inspired by the "relationship" in this novel. Yes, there were plenty of "relations" going on; I just didn't find any that ended with "ship".

Look, people - it's all about the sex. Don't let anybody fool you into thinking it's a love story or it's about a relationship. Let's call it what it is: socially acceptable sex. And not romantic sex or loving sex, but horrid, abusive sex.

Labels: Being A Mom, Product Reviews