In case you missed Part 1, here's all you need to know: Tylenol and Advil are the new cocaine and heroine. Addicts goin' OTC, y'all. (Or least cancer patients.)

The second surgery was a piece of cake! Partly because OTC drugs completely rock, but mostly, because I had the best gynecologic oncologist in the southeast performing my surgery. And if you're having surgery as often as Lady Gaga changes her hair color, then you pretty quickly detect the difference between surgeon and expert surgeon.

Here's the bad/good thing about feeling fine after surgery: you wanna bust outta that place. Hospitals aren't that hospitable when it comes to letting you rest, if you know what I mean.

I didn't argue with him because I bet patients were cussing him out left and right. And I'd already lost so much blood anyway, what was another couple of vials?

But seriously, that was just plain stupid. Yes, I understand that, technically speaking, it's two different days, but in real life, that was only twenty minutes ago. If I had put a casserole in when y'all came in the first time, I'd still have hungry kids shouting, "HEY, is dinner ready yet?"

I got to my room about 5 PM, and by 6 AM the next day, I was passing out twenty-dolla bills to orderlies. "Hey, buddy - wanna make a quick twenty? I need to bust outta here. Like, now."

I asked the nurse if I could go home and she gave me a long list of requirements before that could happen:

You know when a husband asks his wife to have another baby, and she doesn't say no exactly, but instead, she gives me a conditional yes? "Sure honey, but first, I need to quit my job, we need a bigger house, I need an SUV, we've got to get a housecleaner, you're going to have to help with the nighttime feedings....."  She knows that if she makes it too hard, he'll just give up and think it was his idea.

I think that's what my nurse was trying to do with me, but luckily, I'm not that smart, so I was willing to go for it.

As the sun was rising on the morning after my surgery, I was walking the oncology floor, pushing my IV cart with one hand and holding my catheter bag with the other. My butt was also hanging out of the back of my hospital gown, but I didn't realize that until about halfway through the first lap. Sorry, I blame the Advil.

Peeing and getting my doc's okay didn't worry me one bit, but eating that nasty hospital food and not puking? Well, that one scared the crap out of me. Have you ever eaten hospital food? Bleck.

They brought me a bowl the size of Jupiter full of cold, nasty grits. No butter or sugar included. It went against everything that was southern in me.

They looked like they had been petrified and displayed for posterity. It felt like hazing. I'm talking about the stuff that 20/20 episodes are made of. But I forced it down, and did.not.puke. Yay!

Not to mention, I had gotten pretty comfortable with those Advil hits, so I didn't like the idea of getting rid of my IV, either. I worried that I might need a 12-step program to cut the juice.

But I completed my get-out-of-this-hell-hole-bucket-list by 10:30 AM, and I was on my way home for these two little people to keep me company. Now THAT'S the kind of recovery I was looking for! 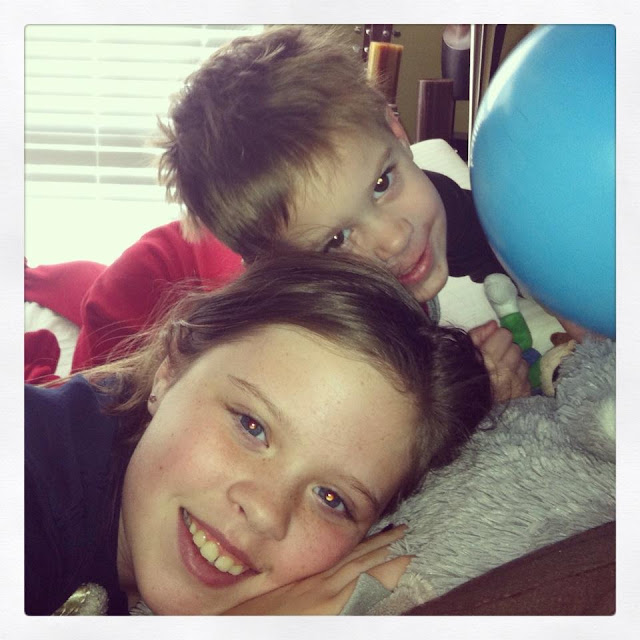 Remember how I mentioned that I sell insurance? Well, I don't know a thing about doing surgery, but I do know something about paying for surgery. Since I was in the hospital for less than 23 1/2 hours, I asked if it could be billed as outpatient/ triage/ observation instead of in-patient, and they said yes. That meant that I paid a $200 copay for a $34,000 surgery. Two points for Team Insurance! Swoosh! Nothin' but net!

It's been almost 9 weeks since that last surgery. I'm pretty much recovered now. I have been deemed cancer free.

I'm still getting used to the idea of not feeling terrible every day. I felt bad for at least a year before I knew what was wrong with me, so feeling crappy became my norm. Sometimes I catch myself waiting to feel bad tomorrow, only to wake up feeling good again.

I don't cry myself to sleep anymore. I don't look at my family like I'm saying goodbye. I'm not waiting on that next bad test result.

It's true what they say about cancer. It changes you. I don't sweat the small stuff anymore. I'm just glad to be here. I wish I could figure out how to lock this feeling up and keep it with me all the time. I'm scared that as more time passes, it will drift away, and I'll go back to complaining about laundry or mortgage payments again.

Life is beautiful, y'all. Let's not forget to live it.