On Friday, Reese Witherspoon and husband, James Toth, were arrested for disorderly conduct and DUI, respectfully, right here in my own backyard. Way to show 'em how we do it in the ATL!

Toth was swerving, so a Georgia State Trooper pulled him over. While he was participating in a field sobriety test, Witherspoon shouted from her silver Ford Fusion, "You're not a real police officer!" Later, she got out of the car and told him she was "an American citizen" and "had the right to stand on American ground."

Way to pull the American card, Reese. That one gets you out of a DUI every time.

But I can't hate. One time, leaving a club in Atlanta, a friend of mine sat on a cop's feet in a parking deck because she didn't want to get her white pants dirty. I bet she didn't think that officer was real, either. You know, it happens.

So, a few things: First, what in the world was Reese Witherspoon doing in a Ford Fusion? I guess movies don't pay as good as they used to. And DUIs are not okay, so I've got an idea: use a couple of bucks from your millions to call a cab or rent a limo.

Second, is it just me, or do you picture her shouting from the car window the same way that she shouted in the bar scene in Sweet Home Alabama? I don't need TMZ when I've got my DVD. 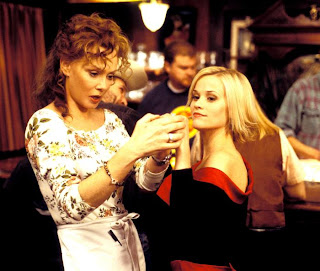 Which brings me to my third point, she's an Oscar winning actress. Couldn't she act sober? Listen, my acting is so bad that Hollywood wouldn't cast me to make a collect phone call, but I could've done better than that, probably.

The upside is that Reese can finally starting shooting her new film: Legally Bombed.

America's Sweetheart issued a sincere apology today saying, "I was scared for my husband, but that is no excuse. I was disrespectful to an officer who was just trying to do his job."

The thing that sucks about being a celebrity is that you're always in the public eye. A celeb does something stupid and the whole world (including a few bloggers, ahem) criticizes them. I do something stupid and, like, three people have an opinion about it. Two, if nobody tells my Mom.

Witherspoon put on a happy face Sunday evening for the New York premier of her new film. And chances are, she didn't have one single drink beforehand.
Posted by Werdyab Blog at 3:36 PM