How Taylor Swift Showed Me That I'm Getting Old

Last week, I went to my third Taylor Swift concert because my daughter is a huge fan or so I say.

Look, I'll admit it, I love T-Swizzle. I love that she's a young girl with a mature soul who writes her own songs about real life experiences.

You know that song she wrote about a breakup she went through? My favorite.

Looking around the arena, it was obvious that Taylor Swift somehow appeals to 8-year-olds the same as 48-year-olds. How does she do that? Try saying that about Yo Gabba Gabba, Dying Fetus or Kenny Rogers. Most performers have a defined demographic while Taylor Swift invites everyone to the party.

And speaking of "everyone", there were plenty of moms there dancing, screaming, and dressed in outfits that should've had age limit restrictions. I watched those idiots trying to act like teenagers and I thought, 'Bless their hearts.'

But then I realized that I was one of those idiots, too. Ahem.

If it would please the court, I would like to present Exhibit A: 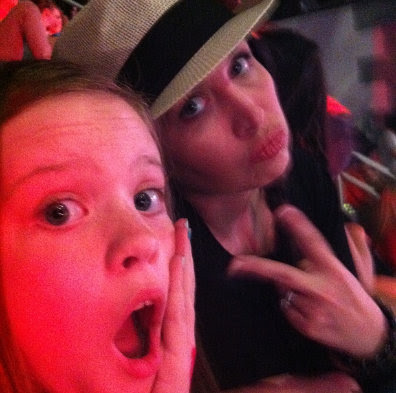 Does that look like a woman pushing 40? Yes, it does. Exactly. And that's why I had no business throwing up gang signs or dressing like Justin Bieber.

Here are a few more things that I learned about concerts and getting older:

Traffic. Unless there's an all-you-can-eat banana split buffet waiting on the other end, it's not worth it. My 45-minute drive to Philips Arena took me 2 1/2 hours. Curse you, Taylor Swift. That traffic was trouble, trouble whoa-ohhhh, oh, oh, oh.

Did I Mention 'Traffic'? Below is a pic of the post-concert traffic situation. Please note that I had two cars sitting perpendicular to cut in front of me, and a third car was backing into my passenger door and blinding me with reverse lights. Meanwhile, we didn't move for over 30-minutes and they were cussing at me for being in their way (i.e., being the only one correctly positioned in the lane). My blood pressure couldn't take it. "Why you gotta be so mean?" 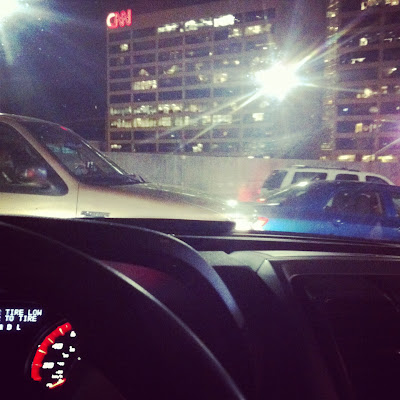 Volume. Here's the thing about concerts: they're really loud. Combine that with all the teenagers screaming, and it was completely overwhelming. My head hurt so bad, I was popping Goody's Headache Powders like Charlie Sheen pops crack rocks at a party. Loud music is the reason that I can't shop at Abercrombie anymore. I think Taylor Swift is next on the list.

Fashion POV. I used to flip through the pages of Vogue to see what I was going to wear, but now it's so I can laugh at what "the kids are wearing these days". But all that changed when I saw Taylor Swift wearing Mom Shorts, or "morts". Check out these high-rise shorts that act like Spanx, keeping your muffin top exactly where it should be: hidden. I'm hoping this trend takes off and 1992 Mom Jeans come back around. Yes, please. 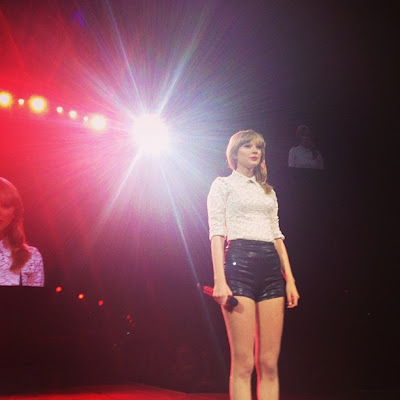 I'm Jaded. Taylor would say things like, "You're the best crowd ever" or "Atlanta is my favorite city to play", and the entire audience would start screaming. Except for me. Because I was all like, 'No, we're not. You're just saying that to make us feel better and then dump us a week before the formal for a Tri-Delt with big boobs.' (I blame my college breakups.)

Sisterhood of the Traveling Gum. I used to love the thrill of a big crowd, but now all I see are germs, bacteria and disease. And nothing says "cool" like being at a concert and wiping your seat with an anti-bacterial cloth.... right? On the way out, I stepped on a giant piece of gum that made me stick to the floor every step. FINALLY, the gum left my shoe, only to be picked up by the next mom walking beside me. Sorry about that, but it was you or me, and Darwinism kicked in.

Midnight Snack. Bailey wanted to eat at Steak 'n Shake on the way home, so we stopped for burgers and milkshakes. Taylor Swift might have sang, "I'm feeling 22", but after eating Steak 'n Shake at midnight, I can confirm that I no longer feel 22.


Exhaustion. I can't hang with working all day, going to a concert, getting in bed at 2 AM, and then working all day again. I'm sure my driving skills were impaired like I'd been playing beer pong since New Year's Eve. I'd rather run a half-marathon than go to another weekday concert. Instead of earning a 13.1 sticker for my SUV, I earned this one:

I had a very sad realization after the Taylor Swift concert: me and my youth are never, ever getting back together. Like, ever.