After two months of pretending to be happily married, which showcased his poor acting skills even more than Get Him to the Greek, Russell Brand finally filed for divorce from Katy Perry.

Well it's about dang time!  Did anybody else give this marriage 15 months?  Yeah.  Me, neither.

TMZ said, and I'll paraphrase here so I don't have to look up the actual quotes, that Russell Brand and Katy Perry never really spent any time together.  Their marriage was over before it began.

TMZ also said that because Katy is a devout Christian and the daughter of evangelistic preachers, she didn't want to file for divorce because her family doesn't believe in divorce.  She wanted Russell to do it so she wouldn't disappoint her parents.

Well, sure.  Because quitting your Christian music career to sing secular music about lesbian experimentation while shooting vodka wearing nothing but a push-up bra and then getting married in a Hindu ceremony to a heroin-addicted Brit who only speaks in four letter words about his sexual fetishes didn't disappointment them in the least.


According to more reports that may or may not be true, Katy's parents, Keith and Mary Hudson, told their church last Sunday that Brand filing for divorce was a gift from God.  They asked the congregation to not judge their daughter, but rather use this as an opportunity to reach lost souls... on Twitter.  Mr and Mrs. Hudson, you're in luck.  There are many lost souls tweeting about your daughter.  You might want to start with Kanye West.

So chin up, Katy.   Divorce didn't disappoint your parents after all.  Too bad I can't say the same thing about everything else you've done. 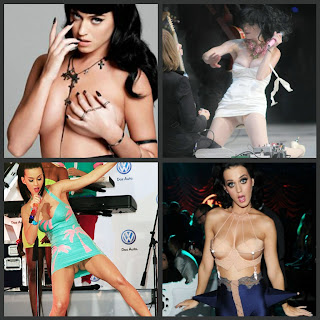