This observation inspired me to re-write the timeless literature classic, Dante's Inferno.

Then I entered the Vestibule - otherwise known as the ridiculously long line to get into this place.  While I'm waiting, I'm always amazed at how many idiots are actually here on a Saturday night.  And then I remember that I am one of those idiots.  Ahem.  As you might recall from Dante's Inferno, the people in the Vestibule were neither good nor evil, but as for the creepy pedophile guarding the velvet rope at the door?  Well, I'm pretty sure that he leans closer to the dark side.

Then I found myself in the first circle of Hell called Limbo.  This is the moment when you realize what you've done.  Why didn't we just go to a movie instead?  You scan the room and get your first glimpse of the craziness that lies ahead of you.  Similar to a deer in headlights, you stand there for a moment, almost lifeless.

The second circle is for the lustful - like the Dad coveting your 100,000 point shot in skee-ball, the child invading your personal space while you're checking out the prize counter, and the kid who begs for a Superman lunchbox even though he only has four tickets left in his hand.

The third circle is for the gluttonous.  I know you know these people!  It's the parents who are too lazy to intervene while their kid is beating the snot out of another kid.  Instead, they just park themselves in the booth for hours to eat pizza and drink sweet tea.

Circle Four is for the hoarders.  Worse than any reality television show by the same name, this is about people who take ownership of a skee-ball lane.  Hey, kid - unless your last name is "Cheese", you have no right to claim that lane for two hours, so give it up!

Circle Six is the division between Upper Hell and Lower Hell.  Undeniably, this is the single row of booths tucked quietly between the game room and Chuck's performance stage.  My Mom thinks that this row should be strictly reserved for grandparents.

Circle Seven is for the violent souls.  Pushing, shoving, yelling.  You'll see more violence at Chuck E. Cheese on a Saturday night than you'll see at a MMA fight.

Circle Eight is reserved for the fraudulent: hypocrites, liars and thieves.  To the parent who encourages her kid to hog a game but then yells at another kid for doing the same thing...  To the future criminal who snags your child's tickets thinking that a 3-year-old won't notice... and to the kid who says that the basketball game is broken just so his little brother can use it... Circle Eight is your special corner.

Circle Nine is the coldest place in Hell.  This has got to be the birthday party section!  Parents, grandparents, friends and family are forced to sit ringside to the "cheesy" performances by Chuck and his band of whacky friends.  A couple of girls who didn't make their high school cheerleading squad come out and lead your party in a pep-rally-esque chant and dance extravaganza.  The grown-ups feel ridiculous and the children get scared.  Nobody gets a victory lap here.  And then, Chuck E. Cheese personally greets the guest of honor.  At my daughter's 2nd birthday party, she hid under the table as Chuck approached us.  My child has the gift, I tell ya. 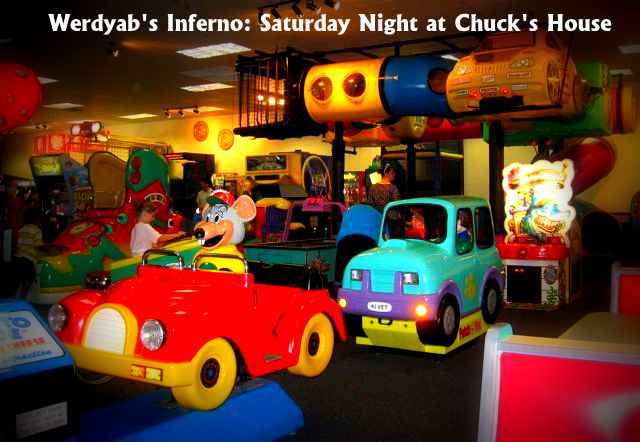 The good news is that they serve beer and Ben & Jerry's at Chuck E. Cheese.  So at least you have something to numb the pain.