There's no crying in baseball

Unless, of course, we're talking about 3-year-olds.  Then there's TONS of crying in baseball.

Tom Hanks would be sooooo disappointed.

We signed Drew up for toddler t-ball this year.  It seemed liked such a good idea at the time.  Ahem.

But there were a few fundamental problems with the whole toddler t-ball thing.

1)  There was a lot of crying.  Did I mention that before?  Because I really wanted to emphasize it.

2)  We had to wake up at 7-A-FREAKIN-CLOCK every Saturday morning.  Normally when I wake up at 7 AM on a Saturday, I think, Phew! It's still early.  And then I roll over and go back to sleep.

3) The kids didn't give a rip about baseball.   All they wanted to do was play in the dirt.  I saw more sand castles being built in the outfield than I did during my last beach vacation.

4)  The parents cared too much about baseball.  Each and every one was convinced that their kid was going to be the next Babe Ruth.  (And I'm not talking about a candy bar here.  That's a Baby Ruth.  I know!  That one tripped me up, too.)

The Dads were performance-driven.  They had their toddlers out there doing drills before each game as if it was going to keep them from running the wrong way around the bases.  (It didn't.)

And the Moms were presentation-driven.  There was an unspoken competition about whose kid was the cutest, had the most expensive equipment, and brought in the best Pinterest-inspired snack.  (I came in a very respectable 4th, by the way.  Only because Drew is so cute.)

For example, the week before Easter, one parent brought in this snack: an egg-shaped jello mold in a tiny Easter basket adored with plastic grass and jelly beans.  O to the M to the G.  Now I'm feeling pretty crappy about those animal crackers from last week.

So I asked what kind of booze was in those jello shooters. HEY.  Somebody could have a peanut AND a vodka allergy!  I was just lookin' out.

5) Offense was a problem.  Even though the bat weighed less than a pound and the ball didn't move at all, they still couldn't hit the stupid thing.

Nine out of ten times, the kids would swing hard, do a Michael Jackson spin (hee hee!), and then fall flat on their butts.  At one point, it made more sense to earn points based on the best dismount rather than actual runs scored.

6) Defense was also a problem.  Have you ever thrown a piece of bread into the lake and watched a zillion fish flop on top of each other to get a nibble?  That's exactly what the outfield looked like every time the ball was hit.

All nine players would run toward it - right field, first base, hind catcher - didn't matter.  And since only one kid got to pick it up, that meant the other nine started.... Well, I've talked about this too much already, so let's just say SEE #1.

So why did we play 3-year-old t-ball if it's so awful?  Because it's the cutest little hot mess that you've ever seen!  I'm talking A-DOR-A-BLE.

Even with the early morning wake up calls, the toddler tears, the pushy Dads and the competitive Moms, it was still totally worth it.

Besides, my kid is the next Babe Ruth.  And I love jello shooters cleverly disguised as post-game snacks. 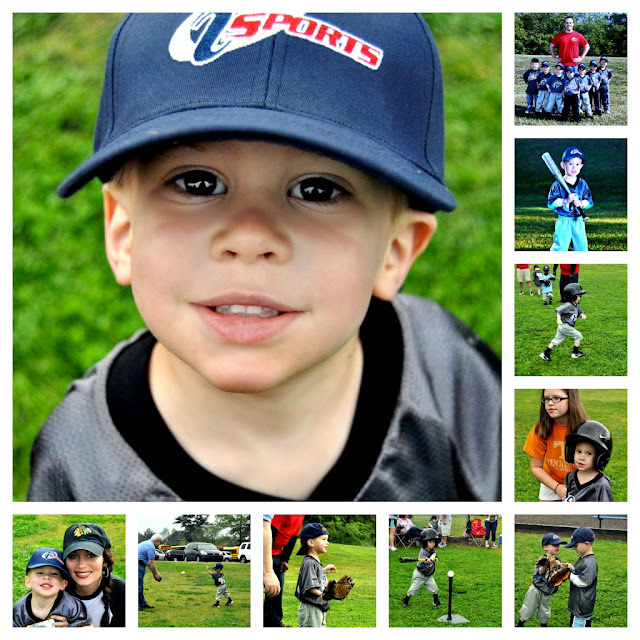