A Cot Full of Kid Glue and Toy Weapons

Last night, I awoke to the sound of Drew's blood-curdling screams coming from his bedroom.  It was the worst alarm clock ever.

Moms, are you feeling me on this one?  It sucks, right?  Before you're even awake, you throw back the covers and jump out of bed.  You run halfway to your child's bedroom but your husband hasn't even rolled over yet.  Ahem.  Your heart is pounding because you don't know what you'll find when you get there.


What if I have to fight off an intruder?  (Good thing I've watched the Karate Kid so many times.  Wax on, wax off, mo-fo!)


What if he's lying in a pool of vomit?  (I sure hope he can swim his way out of it.  Does the Red Cross teach that class?)


But instead, I went monster hunting.


I feel so tough now.  I think I'll get a tattoo.  And maybe even score my own monster hunting reality TV show on the Discovery Channel. 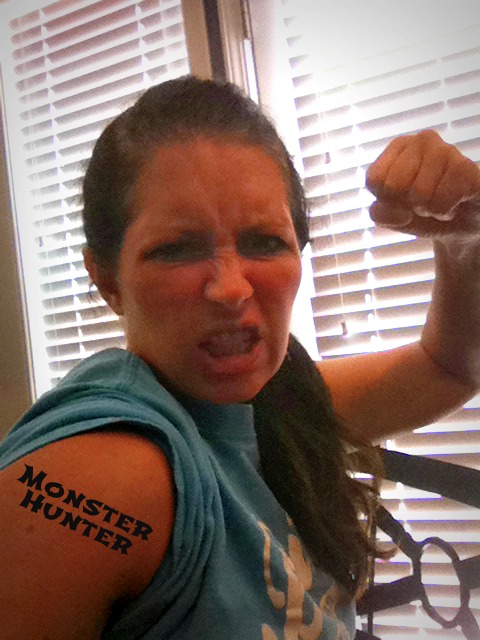 Now a decision has to be made.  Do I get wide awake while trying to get him back to sleep in his bed OR do I take the easy route and bring him into my room?


FYI: If the easy route is ever an option, I'm takin' it.  And since I only had 3 hours of sleep before the slightly less horrifying alarm clock was going to go off, I carried Drew to my room.


Brian and I have a king-size bed, but when one of the kids crawls in there, it magically transforms into a single cot.  Suddenly we're sleeping on top of each other and sweating like our bed is divided by the Equator.

Drew always insists on bringing a bunch of toys with him.  Look, honey.  I feel sorry for you - really I do - but I can honestly say that I don't give a crap if your Spiderman is eaten by a one-eyed monster or not.  And this cot's not big enough for all 47 of you.

I wanted to sleep, but it's impossible to sleep when you're lying on top of a stuffed animal safari.  Those 10-inch toys felt like they were 10-feet tall.  And their cotton-stuffed limbs became razor-sharp spears that punctured my ribs.

You don't know pain until your back has been sliced open by Percy's coal car.  He may look like a harmless train to you - but to me, he looks more like a Japanese Shuriken.


That's when Drew's body created some sort of freakish adhesive because he was GLUED TO ME.  If I turned, he turned.  If I coughed, he coughed.  No matter what I did, I couldn't escape.  He would have been my Siamese twin if I was a 3-year-old boy who weighed 30-pounds.

For the next 3-hours, I tried to quietly detach myself from the new appendage cleverly disguised as my son.  All the while, tossing and turning through a landmine full of toy trains and stuffed animals.

I don't know the exact demensions of space that my body typically occupies in the bed, but whatever it is, I had about 2-feet less than that.

Mathematicians haven't invented a sleep number that can make this overnight arrangement comfortable.  Minutes turned into hours.  Hours turned into thoughts of me running away to a tropical island full of Tempur-Pedic mattresses and goose down comforters.

And just as I was drifting back to sleep, the alarm clock went off.  But luckily, it was the one that I could throw across the room and nobody cares.


So if you need to get in touch with me later, don't bother.  I'm sleeping.