Remember when I made up the word toddlish and Urban Dictionary published it?

Toddlish is the language that toddlers speak, which resembles English, but is much cuter.

Mama's Friend: What did he say?

Mama: Oh, he said that he's hungry and he wants to know what we have in the refrigerator to eat.  It's okay.  I speak fluent Toddlish.


Drew inspired that new word.  And here's an example of Drew's toddlish at its finest.

Each Sunday, Drew colors a picture in the church nursery and then brings it home in a small paper bag with his name on it.

But this week, instead of Drew's bag saying Drew, it said Jude.  Ahem. 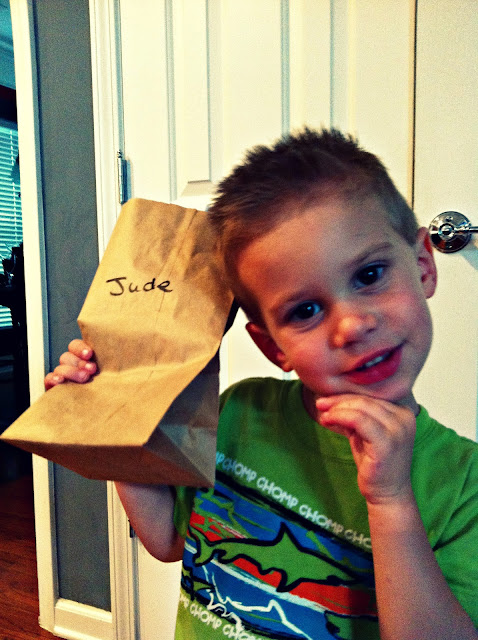 I busted out laughing when I saw that thing!  I turned to Brian and said two words: Beatles parody.

But first, I had to dig through the attic to find my old keyboard.  Then I had to go to the store and buy a gazillion D-batteries because I couldn't find the power cord for it.  But it still worked!  Yay!  I was surprised because I hadn't played it in 5 or 6 years.  And when I took it out of the attic, it was so hot that you could have fried on egg on it.  Breakfast, anyone?

So needless to say, I'm a little rusty.

But it came right back to me!  (Lie.  I could barely find center C on the stupid thing.)
And I started playing Hey Jude by ear!  (Lie. I watched a YouTube Tutorial.  Three times.)
Then I recorded this in only one take! (Lie. This is the 10th take.  The first 9 involved me screwing up the chords or forgetting the words or usually both.  Finally, I just gave up and used this one.)

And personally, I think Drew Penny Lane Sgt. Pepper Yesterday Let It Be Hohenbery has a nice ring to it, don't you?  (Don't worry.  You'll get it in a minute.) 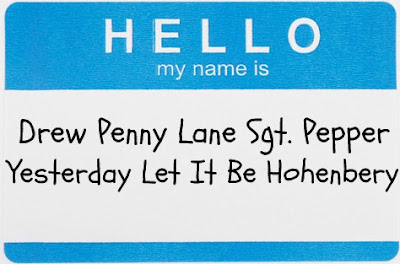