Have you ever been to the Monsters, Inc. comedy show at Walt Disney World?  It's hi-lar-ee-ass.

Even though the monsters are just cartoons on a big screen, and I know they're not real, somehow Disney makes them interact live with the audience.

Most people think that's really cool, but as for me?  It made me check underneath my bed and inside my closet just a little more carefully that night.  Ahem.

There's a couple hundred people in the theater watching the show.  They flash several different audience members up on the screen as part of the skit.  They try to choose the grouchiest, grumpiest Paw Paws to put up there, because the more miserable the person looks, the funnier it is to the rest of us.

Then one lucky kid is interviewed by the monster.

If I had watched the movie, I could probably tell you which one, and maybe you'd be impressed.  Or, maybe he'd be like like Jon from NKOTB and getting interviewed by an accountant would be more exciting.  I don't know, because unfortunately, if it doesn't have to do with shoes or doughnuts, I'm pretty clueless.

Anywhooooo, Bailey got picked.  Yay!  I'm not sure why, I mean, she was acting completely shy and introverted all week long. 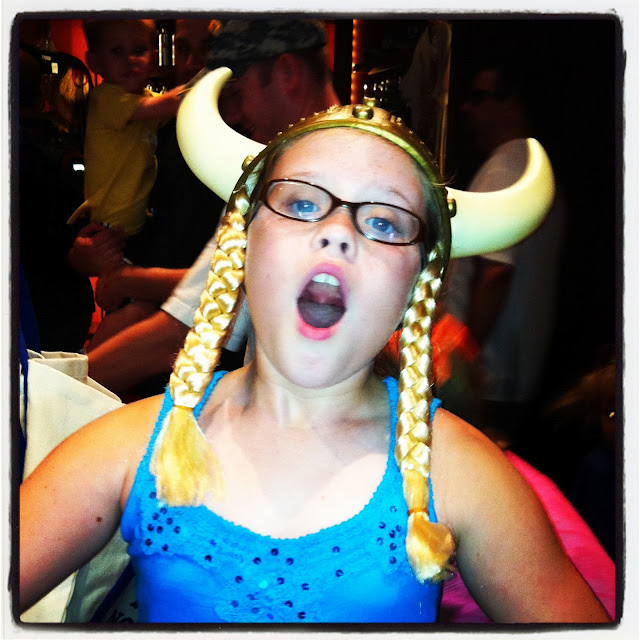 Now, before you watch the video, I'd just like to put one fear to rest.  After the last Presidential debate, everybody was up in arms about the fate of Big Bird and the rest of the Sesame Street gang.

But let me ease those worries, y'all.  No matter what happens with PBS, I'll give you a little bit of Ernie, donation and government subsidy free.

However, if you'd like to make a donation or give me a government subsidy, it's spelled w-e-r-d-y-a-b.  Thank you for your support.

I never knew that I laughed like Ernie until I watched this video.  And now, I can never un-hear it.  It makes me want to LOL without the OL part, if you know what I mean.

So if you need to get in touch me with me later, I'll be organizing my stripped shirt collection, playing checkers with my good ol' buddy Bert, and then taking a bubble bath with my rubber ducky.

Added Note:  Hold up!  I just realized.... is that Bert's laugh instead of Ernie's?  Crap, I just saved the wrong character.  I need a do-over with pigeons and bottle caps.  Stat!

Do you spend a lot of time on Facebook?  Me, too!  We should hangout!  Like Werdyab Blog and I'll like all your hilarious e-cards.  Seriously, you'll be doing me a favor.  I freaking love those e-cards.
Posted by Werdyab Blog at 4:25 PM