Sorry I've missed the last couple of Wordless Wednesdays.  I guess vacationing will do that to a blog.

This Wordless Wednesday pic also serves as a teaser for a video that I'll edit before the Zombie Apocalypse, probably.

Have you ever seen Ellen's Dance Dare videos?  If not, please go to her YouTube channel immediately.  Don't worry, we'll wait on you.

Oh my gosh, aren't they hilarious?

I've been known to bust a move in public a time or two (or fifty, whatevs), so watching these videos made me feel like I was home.

But unfortunately for my family, while we were on our way to Disney World, and about 20,000 feet in the air somewhere between Atlanta and Orlando, I thought, 'HEY, I want to make an #ellensdancedare video, too!'

(You see where I'm going with this, don't you?)

So while we were at Disney World, I dance dared every single character that we met.  All of them.  When Winnie the Pooh saw me grinding behind Tigger, I think he poohed his pants a little.

Merida from Brave was the first princess/ real person/ someone not dressed like a giant stuffed animal/ saying actual words/ pretty girl that we met.  Drew was smitten.

"What is your name, young man?", she said in her perfect Scottish accent.  Drew looked up with those big brown eyes, smiled and said, "Andrew...." 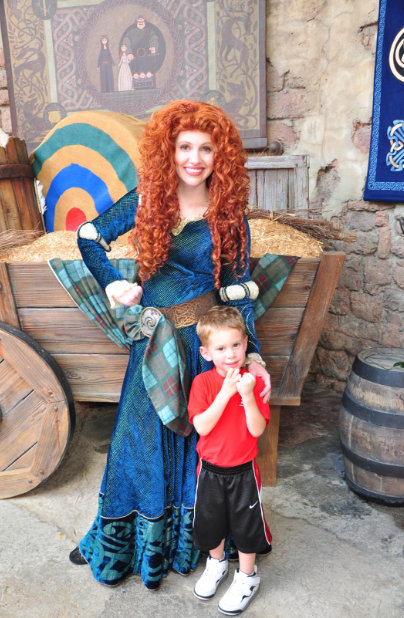 Even though I totally killed his mojo, I had to laugh because we have never called him Andrew, not even once.

In fact, when he was 3 months old, I sat in the pediatrician's office waiting room while the nurse yelled "Andrew?... Andrew!" at least 15 times before I finally realized that she was talking about Drew.  Ahem.

Drew really wanted to impress this Scottish beauty.  Too bad I had to #ellensdancedare her.  Bless his little heart.

Listen, son, a cool name like Andrew doesn't help you when you've got an uncool mom like me.  It's best if you learn that now. 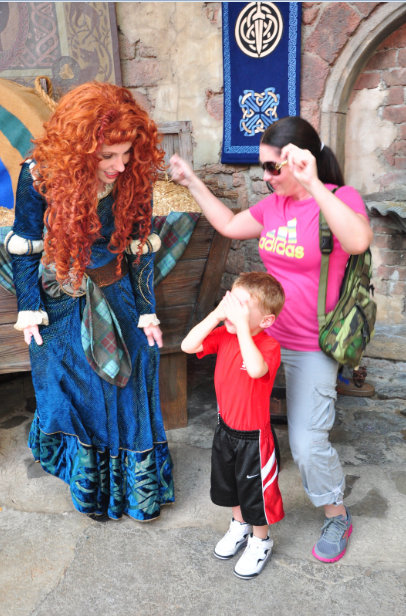 There's more where that came from!  Check back next week (probably) for my Disney Dance Dare video!  I promise you'll never look at Mickey Mouse the same way again.

Oh, and while you're here, would you like to cast a vote for Werdyab Blog?  You would?  Man, you rock!

All you have to do is click on the creepy little cartoon face.  Top Mommy Blogs tracks all the hits coming from my web address, so one click = one vote.  Thank you!
Posted by Werdyab Blog at 5:18 PM