It's Twilight Week and you know what that means.  Everywhere you look, teenage girls and 30-something Moms are going bananas to see the new flick.  They're counting down the seconds.  Literally. 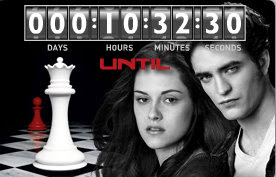 I wish I got the craze, really I do.  But don't worry, you won't be the first person to try and convince me.

Oh. My. God.  It's only, like, the greatest love story EVER.  Okay, so Bella's all torn because she's really attracted to Jacob.  I mean, who wouldn't be? hehehe.  Am I right or am I right?  Anyway, Jacob is soooo sweet, and since he's a werewolf, you know, he can give her a normal life.  Well, sort of.  But Edward is her soul-mate and you just can't fight true love!  Bella is destined to be with him forever, to run as vampires, and start a vampire family.  Team Edward!

If you're a Twi-girl or a Twi-Mom, please don't take offense to this post.  I'm not meaning to poke fun, really.  I'm actually quite envious of you.

I want to feel excitement about something other than a 30% off coupon from Kohl's.  I want to go to the movies with you at midnight and tweet about Edward's hair.  But I don't, so I can't.

When I admit my anti-Twi-ness to others, it often comes as a shock. I get the same look like I just said that chocolate tastes bad or yoga pants are uncomfortable.  And then I feel as awkward as Edward walking into the Red Cross.

Now, granted, I have not read the books.

How can someone who loves to read NOT read the Twilight books?

Well, I'm glad you asked.  See, at first it was because I wasn't interested in a story about vampires, but then it was because everybody else had already read them.  My goal was to be the last woman under the age of eighty to have not read this series.  And man!  What a conversation that will be at Tuesday night Bingo. BOOM. 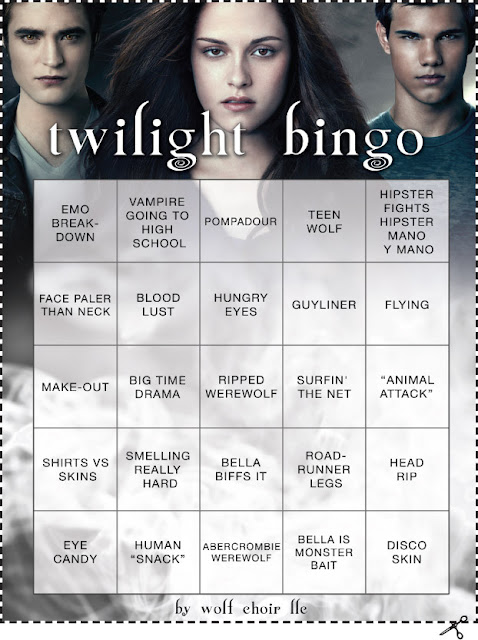 But I have watched the movies on HBO.

I thought the first one ranked just above From Justin To Kelly and just below Battlefield Earth.  Seriously, I've had kidney stones that caused less pain.

Yes, yes, yes... I know.  The books are better.  Then why did the author let some idiot director and a bunch of bad actors bring this novel to life, er, I mean, death?  (Sorry, vampires.)

I've gotten my oil changed in less time than Bella pauses between words.  I want to slap her on back and say, "Spit... it.... out."  And then bat my eyelids.  And then say "Edward" in a raspy whisper.

I'll admit that the movies have gotten better as they've gone along.  The last two actually kept my attention for almost two hours, barring that heinous popcorn spilling incident.

But no matter how much I hate the movie, something magical happens to me during the last 30-seconds of each one of the Twilight films.  I don't know if I'm distracted from all that glitter skin or if it's Jacob's abs, but as soon as the credits roll, I find myself actually looking forward to the next one.

There must be crack in those credits.

Breaking Dawn Part 1 left me wanting to see Part 2, which made me question everything that I know to be true about myself.  Next thing you know, I'll stop drinking coffee or decide that public dancing is embarrassing.

And now there's all this chatter about a crazy surprise ending?  Why must you tempt me, Twilight?  Why?

In fact, I sort of, almost, kinda even want to go with you to to  the theater.

So, uh, this is awkward, but... can I go with you?  My only condition is that you don't tell anybody and you don't laugh too hard at my disguise.  I've taken a stand on this thing for too many years now and I've got a rep to protect.

So to those flying to another city, to those getting out in the freezing rain, and especially to those sitting through a Twilight Marathon this weekend, I will be with you in spirit.

And by spirit, I mean that I'll be sleeping or doing laundry.

Have fun, Twihards!  Please tell Bella, Edward, Jacob and that little vampire baby that I'll see them on HBO in a few months.  Or, you know, this weekend, whatevs.