Hey, y'all!  Whassup?  How was your holiday?

Me?  Oh, mine was good; thanks for asking.  I ate too much, watched a few old movies, and had a couple of organs cut out.  You know, the usual.

Sorry for not updating my blog to let you know that I survived and all, but I've been really busy doing nothing.  Don't worry, I've passed the time by watching reality television.  A lot of reality television.  In fact, I think I've hit my annual maximum and it's only January 7th.

I can name all the dancers on Dance Moms, recall all the children on Sister Wives; I watched an entire season on Amish Mafia, and I think I might have a little crush on Jase Robertson.  Or Si, or Phil, or Willie.  Oh, who cares?  They're all adorable!  Brian loves Duck Dynasty, too, and in honor of that possibly, he hasn't shaved since before Christmas.  He said that "2013 is the year of the beard".  Hot stuff.

Bailey is a fan, too. She's actually the one who got us watching Duck Dynasty in the first place, so Santa surprised her with the Duck Commander Classic duck call, the Miss Priss duck call, and a Chia Willie with a note that said, "To a yuppie girl with too many years in the subdivision."  That Santa is sooooo good. 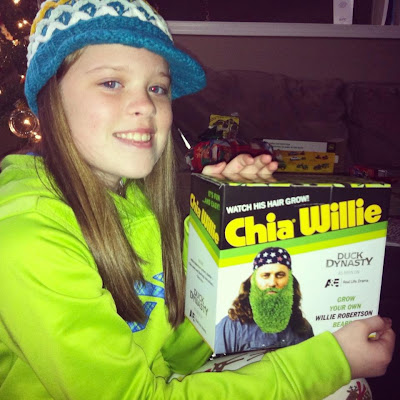 Drew is a little young to be into reality TV, but he's all about some caped crusaders.  He dresses up in a different costume every day.  It's the cutest thing!

"I'm sorry but Drew isn't home.  May I interest you in a superhero or four?" 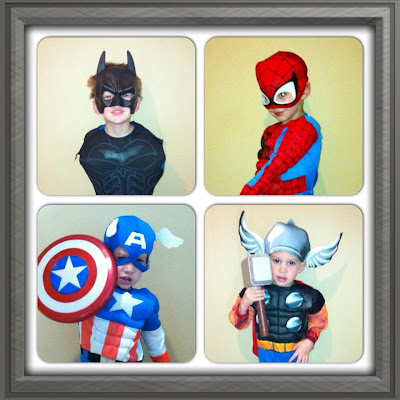 So needless to say, with all this lying around and watching TV, my brain feels like it's shriveled up a bit since we last talked.  Would somebody please pass me a book before it's too late?

The first few days at home were a total blur.  Oxycontin is like a Magic Eraser for memories.

I have flashes of lucidity, though... like when my BFF Laura stopped by for a long chat, even though I have no clue what we actually talked about.  I remember asking for green beans at some point and then crying once when I thought the television was too loud.  Seriously guys, I was a hot mess.  I'm talking about the stuff that drunken sorority weekend retreats are made of.  The stories that when people tell you about it later, even though you kind of remember it, you still swear there's no way it ever happened.

And then you login to Facebook to see the evidence.  Ahem.

I scrolled through about a hundred Facebook comments or emails that I responded to but have absolutely no memory of writing whatsoever.  I mean, it kind of sounded like something I would say, but it could have totally been a sarcasm double and I would have no way to prove otherwise.

I only have a brief flash of memory about these FB posts from when my vision was so blurred that I opted to copy and paste "Thank you!" for a while so I wouldn't screw up.  I found about 30 of these bad boys below.  I guess even when I'm high as a kite, I still value proper grammar and accurate spelling. 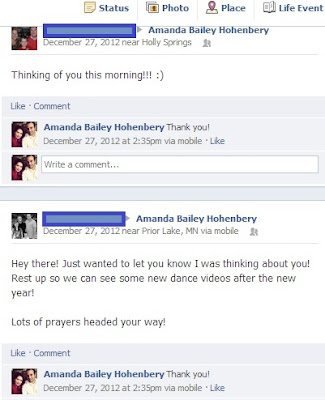 And apparently, I need all the help I can get.  My friend John posted on Facebook that my 20 Things a Mother Should Tell Her Son was still spreading like kudzu, and I commented back, "Brian told me I should hurry up and right a book".

Uhmm, seriously? So you're going to "right" a book, huh?  Looks like you've got a long way to go "they're", dearie.

So I was pretty doped up for the first three days or so after surgery, but I didn't feel any pain.  After that, I switched to an occasional Ibuprofen and still didn't have any pain, but then again, I was just lying around in bed for 23 or more hours per day.

Rolling over became an Olympic event, walking to the bathroom was "going for the gold", and sitting up to eat a bowl of soup earned me my own 60 Minutes episode.  And the stairs?  Well, let's just say that I asked Brian if there was a way to install a lift or elevator in the house... and I wasn't kidding.

So I'm not in pain; I'm just really sore like me and Ralph Macchio just finished up taping Karate Kid 287.

But all things considered, it hasn't been that bad.  I thought the recovery after the first surgery was much harder, even though this one was considered more invasive.  I guess that's what happens when you're still full of cancer and don't heal for crap.

Today is the first day that I've actually cared if my hair was washed or if my socks matched my pajamas, so I think I'm on the road to recovery.  Next thing you know, I'll probably even care about the cleanliness of my toilets or the laundry.

I hopped on the scale today and saw that I've lost about 7 pounds because I haven't been eating as much, and of course, there was that whole clear liquid diet for Christmas thing.  So I'm looking better I guess, if you can ignore the fact that I'm still really swollen in my gut from the surgery.

So now, I look like somebody who's been on a strict diet of nothing but Slim Fast and salt...  A little skinnier everywhere else but really bloated in the middle.  Not my first choice, but hey, I'll take what I can get.

And just like every other time when I've lost a few pounds from a virus or whatever, I swear THIS TIME I won't gain it back.  But I always do.  Staying true to form, I ate a cheeseburger and a banana split last night for dinner, so.... I'll just let you connect the dots from here.

I want to tell you all about the surgery, but I thought I should start at the end(ish) since it's been so long since I've updated you. I wanted you to know that I'm alive and well and watching a Grey's Anatomy marathon on Lifetime.

So we'll start at the end and work our way back to the beginning, okay? Think of it like a Pulp Fiction-style recap without all the famous movie stars or the lavish Hollywood promotions.

Please check back next time for all the details about my surgery, including the time I showed my ass to someone visiting a patient down the hall.  And unfortunately, that's not a euphemism for "getting really angry at him".  It happened quite literally.