Have you noticed a little less Amanda pollution on the internet lately?  Sorry I've been out of touch, but I haven't been feeling good because of some stomach problems.

And I know what you're about to ask me: "What kind of stomach problems?"

TMI, y'all!  But since we're friends, I'll tell you.  First off, it has nothing to do with puking in public or pooping my pants.

I know.  I'm disappointed, too.  That would have been an awesome blog post.

My symptoms have included a general state of crappiness, extreme fatigue, pain, nausea, and my stomach swelling up like I swallowed a watermelon whole.

It sucked the obnoxious right out of me.  I didn't even feel like dance walking or anything.

For example, I tried a new hairstylist a couple of weeks ago.  I typically use my salon time to practice my stand-up comedy bit or enjoy some girl talk.  But instead, I sounded like a 37-year-old trapped inside an 87-year-old's body.

All I did was complain about aches and pains and trips to the doctor's office.  I mentioned that I write a humor blog and the stylist said, "Really?  I'm surprised because you don't seem funny at all."  #I'mCoolerOnline

My stomach swelling was so bad that Bailey asked me if she was getting a baby brother or a baby sister.  Ahem.

I've never been that good at math, but suddenly I became a master mathematician counting back weeks in my head faster than you can say HOLY CRAP.  But we're good.  Although I wouldn't blame karma if it punished me for this post.

Sooooo, just in case anybody was unclear after that last paragraph: I'M NOT PREGNANT.  Phew!  Moving on.

Based on the symptoms and physical exam, my gastroenterologist thought that my gallbladder was the culprit, so he ordered a HIDA scan.

Have you ever had a HIDA scan?  You lay in a MRI-looking machine for about 3 hours.  During this time, they inject you with a radioactive agent that lights up your gallbladder like the 4th of July.  Then you're injected with the same hormone that you release after you eat to determine gallbladder functionality.

The machine does all the work.  It spits out some fancy-looking charts and graphs and gives an exact percentage of organ function.

So the nurse talked on the phone THE.ENTIRE.TIME.  I don't know if you know Heather or not, but according to what my nurse told Rebecca on the phone, Heather sounds like a total B.  And if I was her husband, I'd probably leave her, too.

I don't think she even touched the machine once.  Uploading pics to Facebook looked like more work.

But she was the one who injected me with the radioactive agent, so she didn't get a free pass.  She walked in wearing a white, protective suit and oversized gloves.  Then she unscrewed a huge metal cylinder that contained a single syringe.

Hey, lady - if you're scared to touch it, I'm a little scared to have injected it into my body.  Especially with you wearing your Doc Brown Back to the Future suit.  What if we don't hit 88 miles per hour?  Will I be stuck in 1955 forever?

The nurse said that most people hate this test because you have to be still for so long.  To make it more bearable, you can watch television or take a nap.

Uhmm, seriously?  What are you people complaining about?  The last time that I laid around in the middle of the afternoon was sometime during the Clinton Administration.  Can I come back next week for another scan?  Pretty please?

Besides watching CSI without one single kid asking me to wipe their butt, there was another awesome part about this test.  IT MADE ME RADIOACTIVE.

I really wanted to pee somewhere weird to see if I could make stuff grow.  Like one of those flesh eating plants from Little Shop of Horrors or maybe a nice petunia.

And, listen -  I've seen those Spiderman movies and I know what I was promised.  One spider bite, and I would have been Spiderwoman.  But it didn't happen.  Damn it.  Looks like I bought this costume for nothing. 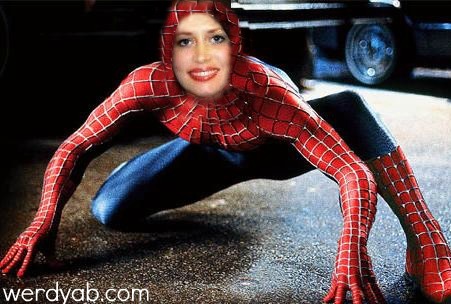 Tune in next time to hear all about my second day of torture, which included a long nap and somebody else cooking dinner.

And I don't mean to give anything away here, but it involves anesthesia and a Waffle House.  There, I've said too much.