Mamapedia Voices: Back to School

Read me on Mamapedia today!   We're chatting about our kids' back-to-school experiences, so pull up a chair, grab a cup of coffee, and join the conversation, honey!  We'd love to hear from you!

My kids' reactions to the first day of school were a mixed bag.

My 6th grader, Bailey, was excited about changing classes and becoming an elementary school "Senior" this year.  She was happy to see her friends and exchange stories about summer vacation.

I said,
"It sounds like you had a good first day!"
"Well, it was going great until Tyler told everybody that he named his new puppy Bailey after me.  Pfft."
"How did that make you feel?"
"I was EMBARRASSED.  Now everybody thinks I have a dog's name!"

Ahhhh.  6th grade innocence - when you're more worried about having a dog's name than having a boy thinking you're cute.  GOOD.  LET'S KEEP IT THAT WAY.

As you read in the Mamapedia article, my son Drew started Pre-K a year early.  He was accustomed to a life of daycare leisure -  playing with toys, running around the classroom, and taking 2-hour naps.

But he quickly learned that Pre-K was no joke: circle time, sit in your seat, no talking, single-file line, 45-minute naps.  And now, those are all cuss words to Drew.

Needless to say, it was a bit of an adjustment.  When I asked Drew about his first day, he said, "I hate Pre-K!"  And that's pretty much all he had to said about that.

Remember how Drew wanted Waffle House for breakfast on the first day of school?  That's exactly what he wanted for dinner, too.

And after the day he had, if my baby wanted waffles, my baby was gettin' waffles.

I took a couple of photos of him, but this was the happiest face that I could get.  Bless him. 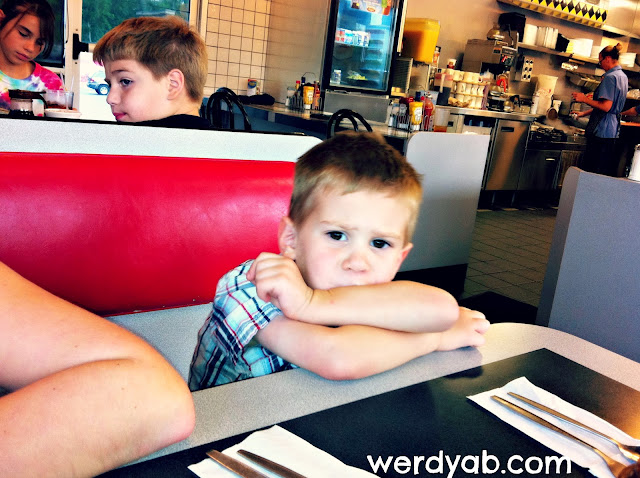 But now, I'm very happy to report that Drew has adjusted well.  He doesn't hate Pre-K anymore; he just moderately dislikes it.  I'm hoping that by September, we'll move into the "slightly annoyed" category.

And Bailey is doing great, too.  She loves her classes, teachers and school activities.  She is playing softball for the middle school team, so she's gotten a chance to meet some girls who can show her ropes next year when she starts middle school.

How was your child's first day?  Were they nervous?  Did they like their teacher?  Did they make any new friends?  Did they start a new school?

And how were you?  As for me, I was an emotional hot mess.

I've closed the comment section on my blog for now, but we're still hanging out on Facebook and Twitter. Stop by anytime!  And please visit Mamapedia today to join the back-to-school conversation.  We'd love to hear what kind of hot mess you were on the first day of school, too.  No?  Just me?  Oh.