I've been a little spacey and emotional this week.  I guess it was pretty obvious when I didn't know the difference between Bert and Ernie in this post.  And now, Elmo says that he won't invite me to Mr. Noodle's party.  Some things you just can't un-do.

I've written about not feeling well lately.  I've felt "off" for months, like I was fighting off the flu all the time.

A routine pap smear revealed the likely problem.  A biopsy confirmed that I have cervical pre-cancer at it's most advanced and aggressive stage.

But there's still some bad news.

My last pap smear was a-year-and-a-half ago and it was perfect.  I have never had one single abnormal pap in my life.  But now, my pap result is as bad as the test can indicate.

It typically takes 6-10 years to progress to what I did in a little over a year, so it's very aggressive. It has already contaminated the entire organ.  I am too late to freeze or remove the infected portion.

In addition to being a pre-cancer overachiever, I have also confused my doctor because I have never tested positive for HPV, a virus which is the leading cause of cervical cancer.

The fact that I don't even do cervical cancer like normal people should validate everything that you know to be true from reading this blog.  But in this case, I don't want to be the only one dancing at Starbucks (so to speak), and it concerns me that my body isn't following a predicted pattern.

I will be having surgery on Thursday, October 18th.  I'll be laying low for the next few weeks and kicking cancer's ass.

It is possible/ slightly likely that based on the aggressive nature and the level of contamination, they will find cancer in the removed cervix.  The biopsy only tests a snip, so some of those Stage 3 pre-cancer cells could have already flipped over to cancer cells in an untested area.  I'll have the pathology report 4-5 days after surgery.

If this is the case, I will see an oncologist for more surgery and possibly radiation.   They are preparing me for the worst, but I'm hoping for the best.

As far as cancers go, this is a good one to have.  It's easily curable and a lot more common than I realized. It seems like many woman have had cervical pre-cancer or cancer scares on some level.  It good to know that I'm not alone.

To complicate matters, I'm also having some digestion issues as well, so my gastroenterologist wants to rule out colon or intestinal cancer.

I hate to sound picky here, but, uh, could people PLEASE quit using the word cancer around me?  Thanks for your corporation.

In related news, the gastro performing my colonoscopy is young and handsome.  Shouldn't that be illegal?  Listen, if at least three people on this earth don't refer to you as "Paw Paw", you are too young to perform my colonoscopy.  He looks exactly like Aladdin, so on a scale of 1 to me singing "A Whole New World" while I'm doped up on anesthesia, I'm going with an 11.

In the past week, I've cried a lot and I've felt scared.  I've faced my own mortality and my insecurity about sharing that with others.  I've sobbed over not being able to have any more babies.  I've looked at my husband and children like I was saying goodbye.  It's been rough.

One of my best friends encouraged me to share this experience on my blog and remind women about the importance of preventive care.

When I first got the news, Brian and I talked, and I decided that I didn't want to tell anyone.

I guess because of where it's located and/or the fact that it's often tied to a virus, many women don't want to talk about it.  I know because I didn't either.

But then I thought about how if you are monogamous, you have never had an abnormal pap, and you  have never tested positive for HPV (like me), then the doctors say that you can safely go 2-3 years between paps.

If I had waited another year or two, we'd be having a completely different conversation right now.

I owe it to you to put my own awkwardness aside and remind you to take care of yourself.

If it's been more than a year since your last gynecology exam, please pick up the phone and schedule that appointment right now.  And if you are having any other health issues, please don't delay in going to the doctor.  Anything caught early is best. 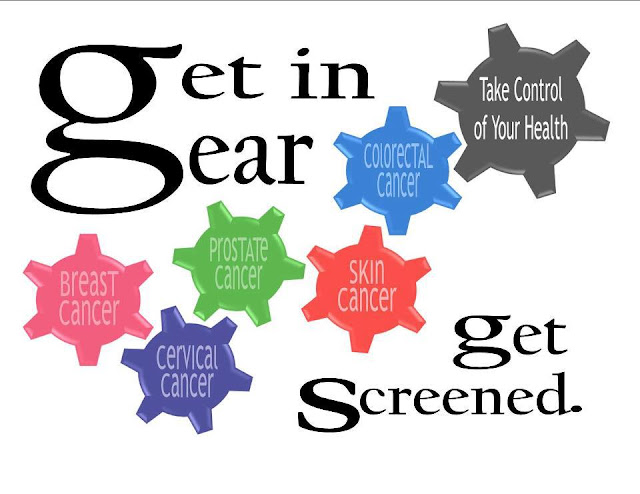 Please pray for a successful surgery, negative margins, no cancer pathology reports, good colonoscopy biopsy results, and for my stubborn gut to start working the way it's supposed to.