What do me, Taylor Swift, and a goat have in common?

As you might have read here, I took my daughter to the Taylor Swift concert and learned that I'm too old to enjoy concerts anymore.

I asked Bailey to invite her friend, Carlee, because of what happened last time:


"Yay! Taylor Swift tickets!!! But, is anybody going with me?"

Of course somebody's going with you. Me. Duh.

Of course somebody's going with you that's cool. Me. Duh.


Check out Bailey's face while I was dancing and singing "Love Story" at the top of my lungs. 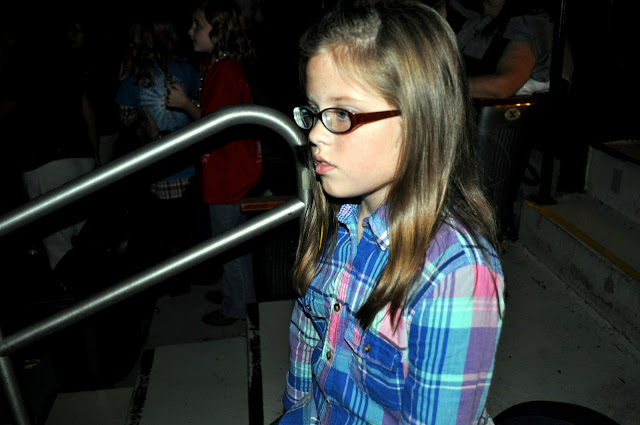 On the way to the concert, the girls were sitting in the back of the SUV. At one point, I think we were actually traveling in different zip codes. They whispered quietly - careful not to include "the Mom" in any of their urgent conversations about Instagram or Justin Bieber's relationship status.

I felt like someone who didn't have a date to the prom, so I tagged along with another couple, feeling very third-wheelish the entire night, sitting by myself in the corner and eating sausage balls. Not that that actually happened, as far as you know.

So how was the concert, you ask? It was great!

I know your time is valuable, so here's all you need to know:


Taylor Swift flung her hair around, danced awkwardly, sang about her feelings, and talked about her ex-boyfriends a lot. Oh, and Ed Sheeran is really British. I couldn't testify in a court of law to a single word he said.


That's it. That's all you missed.

I heard an interview with Taylor before the show. She said that she focused on music for this tour, instead of theatrics like she did in the past.

Really? Because there was a lot of this going on.

Kind of looks like theatrics to me. I bet Taylor describes "Phantom of the Opera" as a couple of kids hanging out in their basement and listening to music.

During live performances, Taylor often cuts her eyes toward one side of the crowd and waits for them to scream. Like this:

And since the tour is called "Red", be prepared to see a lot of red stuff: red lips, red nails, red shoes, red guitars, red dresses, etc. And considering all the people that cussed me out while I was stuck in concert traffic, I even saw red a couple of times.

I hope you like remixes. "You Belong With Me" was a 1950's shoo-wop song. Spoiler Alert: It was terrible. And the "Trouble" remix was really dark. It left me with the same icky feeling that I get when I watch "The Walking Dead" too close to bedtime.

And speaking of "Trouble", have you seen this video yet? (If not, you're welcome.)


It's had over one-million views, and my kids can account for at least 750,000 of them. I can't hear "Trouble" without hearing goats now. I was really hoping that Taylor would bring out some goats, but there wasn't a single farm animal in sight. Not a sheep or a rooster or anything. Such a disappointment.

She puts on a very high energy show with moving sets, acrobats, dancers, costume changes, fireworks, and more. There's also some quiet acoustic times when your undiagnosed A.D.D. can take a breather.

She always interacts with the crowd and everybody loves it. She even crowd surfs.

At our show, someone held up a sign that said, "I'm missing prom for this!", so Taylor thanked her and came off the stage to give her a hug.

Call me cynical, but I'm raising the B.S. flag on that one. How many proms are on a Thursday night? And with a 45-city tour, it's not like she had to travel too far to get to the show. Next time, I'm bringing a sign that says, "I missed my wedding for this!". That should earn Bailey a handshake, at least.

Then again, she could've been talking about cost, as in, I can't afford to buy concert tickets and prom tickets in the same century.

It's not cheap, y'all. Expect to drop $150-$350 per ticket, and you'll be sitting so high up in the nosebleeds, you could join Jupiter's orbit of the sun. Don't forget incidentals like parking, t-shirts, hot dogs, and beer - if you're old enough and need something to numb the pain.

"I'm sorry, Bailey. I wanted to send you to college, but I spent all your college money on Taylor Swift concerts instead." - Me, after a few more Taylor Swift shows.

As Bailey and I were flipping through photos after the concert, we noticed this one. 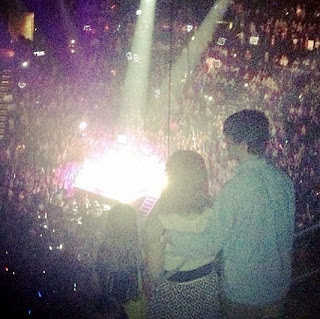 That's what Taylor Swift songs will do to you, people. I bet that dude was fine with spending a few hundred bucks to make her happy.

And Bailey's face was pretty priceless, too. Yep, totally worth skipping college for. 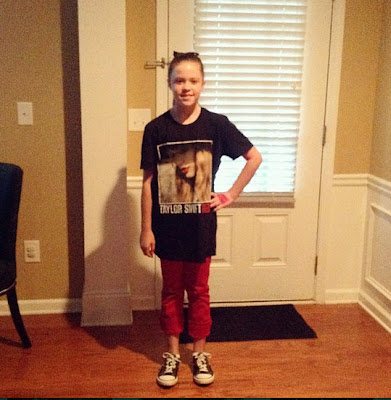