I hate back-to-school paperwork, not as much as getting a root canal, but definitely more than watching From Justin to Kelly.  And that movie was terrible.

Is there a "No Changes" option?  Listen, my time is valuable.  That True Blood isn't going to watch itself, you know.

And there's always an uncomfortable catch-all question at the end.

Here's where things get awkward.

If I leave it blank, then I'm a bad parent who doesn't give a crap about my kid's happiness between the hours of 8 AM and 2 PM.  Drew's well-being does not concern me at all.  I AM EVIL.

But if I write too much, then I'm a needy, overprotective parent who's going to be at the school anytime my kid sneezes or they need a volunteer for the Fall Festival.

Make that mistake, and somebody's asking you to be the PTA President.  No.Thank.You.

If I was nice, I would have done Drew's teacher a solid and written,

There is some information that you might find beneficial, so thanks for asking!

Drew has been known to expose someone's butt in public, which can lead to a WWF smack-down. You probably won't be able to understand him (bless his heart), so when he says his name is "Jude", remember that we spell it "D-r-e-w".  Oh, and last year, he gave his teacher crap.  And I mean that literally.

Basically, I suggest you stop by www.werdyab.com.  And remember, it's never too late to start a new career.


But I didn't.  Instead, I wrote, "Drew loves to play with puzzles and read books".

I need to get something off my chest here, THAT WAS A LIE.  Drew hates them both, but I felt like "video games and naps" wasn't as impressive.

As a parent, it's my job to convince you that my kid is the next Albert Einstein.  As a teacher, it's your job to figure out that I'm a liar.

A 6th grader's paperwork isn't as personal, so I was flying through it.  In fact, I was going so fast that I misspelled my own name.

That's right, ladies and gentlemen, when I signed my own name, I did not spell it correctly.

But now, I'm totally off the hook for the Room Mom gig.

1. Mrs. Smith's Room Mom from last year
2. Nice lady who volunteers for the PTA
3. Idiot who can't spell her own name.


Below was an actual part of Bailey's school paperwork.  Is it 1994 and nobody told me? 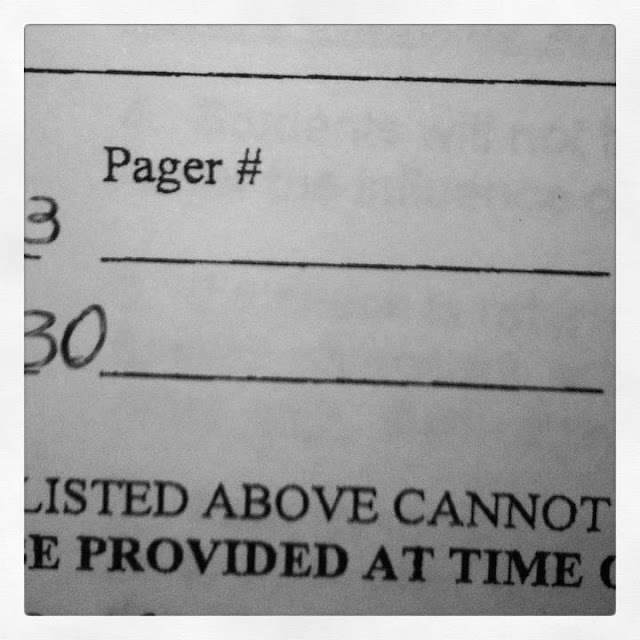 I didn't know pagers existed anymore, but guess what, you can still buy one!  Believe me, I checked.

So I've added "beeper" to our back-to-school shopping list for next year - right beside Nirvana Smells Like Teen Spirit CD and silk button down shirt with a floral vest.

"What's a pager, Mama?"
"I had one in the 90s.  We clipped them to our belts to get messages that were sort of like text messages, except it was just a phone number.  Then we'd use pay phones to call the people back."
"What's a pay phone?"
"There used to be phones at gas stations and at various places near the highway for people to pay a quarter to make a phone call."
"Ohhhh!  A pay phone!  So that's what Maroon 5 is talking about!  Why didn't you just use your cell phone?"
"Most people didn't have cell phones back then.  They were crazy expensive, like, several dollars per minute."
"Really?  How much was it to send an email?"
"Cell phones couldn't access the web.  In fact, when I had a pager, I did not have an email address or a computer. If I needed to write a research paper, I had to go to a place called the LIBRARY and read some things called BOOKS."
"Oh, Mama!  We have libraries and books now.  But what about Facebook?  Was there Facebook?"
"No, Facebook hadn't been invented yet.  Myspace hadn't been invented yet, either."
"What's Myspace?"
"Exactly."


Seriously.  I've GOT to get me a pager before next year!  I'll be the envy of all the moms who can actually spell their own names.

Labels: Being A Mom, Things Kids Do